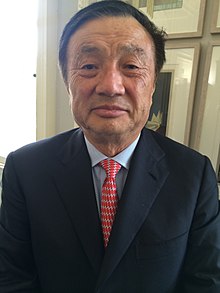 Ren Zhengfei was born in 1944 in Zhenning County, South China's Guizhou Province, the oldest of seven children. His father, Ren Moxun, had moved from the east Chinese province of Zhejiang to the southern province of Guangzhou during the Japanese occupation and worked as a clerk for an armaments company of the Kuomintang government. After 1949, he became the headmaster of Duyun's No. 1 Middle School , and Ren Zhengfei's mother was a senior teacher at the same school.

After graduating from secondary school, Ren Zhengfei studied at the "University of Engineering and Architecture" in Chongqing in the 1960s . After graduation, he reportedly worked at the People's Liberation Army Research Institute (PLA) in a unit specializing in IT . He did not hold any military rank during this time. Due to his parents' social background and their ties to the Kuomintang, he was denied admission to the Chinese Communist Party until 1978 . During his time with the PLA, Ren made a number of technical advances that brought him attention on various levels. Ren was sent as a delegate of the PLA to the National Science Conference in 1978. In 1982, 500,000 jobs were cut in the army, Ren was also laid off and went to Shenzhen the following year , where he continued to work in the electronics sector.

In 1987, Ren founded Huawei Technologies Co. Ltd with starting capital of 21,000 yuan , which at the time was equivalent to around US $ 5,000 or 9,000 German marks. At the beginning, Huawei worked on behalf of a company from Hong Kong in the area of ​​sales, installation and maintenance of server control devices and the like.

In 1992, Ren developed a C&C server switch , which cost only 1/3 of the market price at the time and was a first great success for Huawei.

Ren's relationship gave Huawei access to contracts from the Chinese government to build data centers and telecommunications networks using 4G technology. As part of China's intensification of cooperation with African countries, Huawei was also active there in the 1990s in setting up telecommunications systems.

Ren is a member of the 17-strong Board of Directors , but is currently not one of the three CEOs who rotate every six months. The company had annual sales of EUR 95.7 billion in 2018. Ren owns 1.42% of the shares in Huawei. Huawei is thus independent from Ren, the remaining company shares are officially held by the employees, but the actual ownership structure is not transparent. A 2019 American study concluded that the company is effectively state-owned.

Ren's first wife was named Meng Jun and she was the daughter of Meng Dongbo, a former deputy governor of Sichuan Province . He has two children with her: a daughter Meng Wanzhou and a son Ren Ping, who both took their mother's surname.

After their divorce, he married Yao Ling, with whom he has another daughter, Annabel Yao, who is 25 years younger than Meng Wanzhou. Annabel is a ballet dancer studying computer science at Harvard University .

Ren's third wife is named Su Wei and was reportedly his former secretary.

Ren's eldest daughter, Meng Wanzhou, is Huawei's Vice President and Chief Financial Officer (CFO). In December 2018, she was arrested in Canada on US request on suspicion of violating US-Iran sanctions, bank fraud, money laundering and industrial espionage; only on payment of a large bail was she released until the allegations were clarified.

Ren Zhengfei, who is considered silent, denied the allegations in one of his rare public statements.