As residual waste (in Switzerland: waste ) primarily the consolidation of all types of waste (is waste paper , scrap metal , scrap glass , biowaste , light packaging , waste wood , etc.) in the appropriate containers ( residual garbage cans , waste containers , public trash cans understood etc.), which were inseparable by complications or human laziness . In a broader sense, non-recyclable or contaminated materials are to be classified directly as residual waste, as these cannot be assigned. Therefore, there are very few things that originally belong to the residual waste.

The term is made up of leftover and garbage . The connection arose from the fact that the purpose of residual waste was originally to enable waste sources (households, companies, etc.) to dispose of it easily. It is often the case that things are disposed of that consist of substances for which one usually does not have a collection container, no container is available in the vicinity or the amount of the substance is so small that people do not want to make a great deal of disposal. In these cases, one speaks of waste residues or continuous from residual waste .

There is no legal limit as to which things can be disposed of by consumers as residual waste and which cannot. It is only recommended to separate the waste as far as possible in order to avoid complications in the disposal systems during sorting, as well as any resulting ecological problems.

After use, the following things originally belong to residual waste, due to the non-recyclability of the material and / or due to excessive contamination. 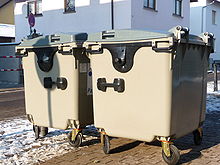 With the introduction of the Recycling and Waste Management Act (KrW- / AbfG) in 1994, municipal waste was divided into three groups:

As a result of the harmonization with EU law, since February 1, 2007, a distinction has only been made between:

The term residual waste is not used in the law, it always refers to waste ( Section 3 (1) KrWG).

Elimination and treatment or avoidance

With the nationwide introduction of separate waste collection, the specific amount of residual waste per person and year in Germany was reduced by almost half between 1990 and 2000. Untreated residual waste has not been allowed to be landfilled in Germany since 2005. Large-scale systems for mechanical-biological or thermal residual waste treatment are a negative item in the economy. A release of pollutants through the systems cannot be completely avoided, even with considerable filter effort. In addition, it takes a lot of effort to destroy products and substances that were previously manufactured and transported with even greater energy and technical effort. Since such an end-of-pipe technology is of questionable ecological benefit, a waste-free recycling economy is sought. This paradigm demands that sustainable waste concepts formulate and implement targeted measures to avoid and reduce residual waste (e.g. "the waste-free community", "the waste-free school") and measures to prevent waste in the entire production line, as well as when using any economic goods. From the point of view of sustainability, the longest possible service life of a product comes first, i.e. its reuse , then its usefulness for multiple purposes and users, reusability (e.g. car sharing ) and at the end of the service life a product and its parts should be as easy to dismantle as possible recyclable his ( recyclability and reusability ). It is then sent to separate waste collection and material recycling without creating residual waste. Depending on the product, the materially bound energy can be used 4 to 200 times more efficiently than z. B. by burning it. According to the Recycling Management Act (KrWG) of the Federal Republic of Germany, the material recycling of waste has priority over the energetic recovery. Only at 11 MJ / ton is energetic recovery legally equivalent to material recovery and permitted.

The biggest problem for an incentive to reduce residual waste is that most municipalities in Germany charge their residual waste fees according to the container volume provided. How full the MGB is (filling level) and how often it is actually emptied (vacation etc.) is neither recorded nor charged. Because of the increasing number of complaints from the population, some municipalities have garbage trucks that scan and weigh the MGB, so that households only have to pay for the amount of residual waste precisely measured for them. For multi-family houses and narrow city quarters, there are collection containers with an attached garbage lock, in which the volume or weight of garbage per throw is measured after the user has identified himself via a transponder .

The density (volume weight in kilograms per cubic meter) of the residual waste depends on its composition and thus on the producer.