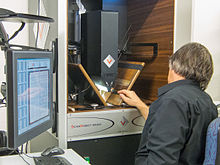 Retro-digitization is mainly used in libraries and archives to provide digital data for scientific use, to enable worldwide access and to preserve endangered works for posterity ( preservation of holdings ).

Written templates are mostly digitized as images (image digitization, e.g. using a scanner or digital photography ) or in full text ( using OCR or copying), with the latter choosing between plain text (i.e. pure text) and excellent text (i.e. heading structure and hyperlinks ) differs. A well-known example is the digitized version of the Gutenberg Bible . A large Austrian retro-digitization project is Austrian Literature Online . In addition, today all legal texts are retro-digitized and offered in legal information systems .

In Germany, the retro-digitization of written cultural assets was initiated in 1997 by an initiative of the German Research Foundation (DFG) . For this purpose, it set up a special funding program - which continues to this day - in which a large number of projects in libraries, archives and other cultural institutions for the digitization of various collections ( monographs , pictures, newspapers and magazines , encyclopedias, etc.) were financed. In order to develop suitable technical and administrative procedures for the retro-digitization of large volumes of holdings, which was largely untested at the beginning of these funding measures, by scanning the original documents, the DFG suggested setting up digitization centers at the Bavarian State Library in Munich and the University Library in Göttingen. Digitization projects funded by the DFG must generate digitized files in METS / MODS format. As a result, this specification has developed into a kind of standard that is now used for many digitization projects. Standardized access and thus broader knowledge of the digitized holdings that are now available is sought via a central directory of digitized prints .

For long-term archiving of digitized media, suitable strategies must be considered so that the data and content can still be displayed and used in systems (hardware and software) that will be used in the future. Retro-digitization is sometimes combined with archiving on microforms , as these have a much longer shelf life than digital storage media . Both microforms and digital copies are recorded in the European Register of Microform and Digital Masters (EROMM). The digitization of catalogs in order to open up the stocks they contain is called retro-conversion . An offer of digitization - whether just scan or full text - on the Internet is called web reproduction ( webrepro for short ).

The USA versus Europe Controversy

The retro-digitization of book inventories experienced a considerable expansion and acceleration in 2002 with the entry of the major US corporation Google. In its extensive digitization measures, Google partly works with libraries and research institutions that v. a. edit scientific literature, together; z. B. in Germany with the Bavarian State Library in Munich.

The US group Amazon announced in 2009 that it would, in cooperation with US university libraries, include the retro-digitization of around 400,000 no longer available books in its electronic on-demand delivery service BookSurge .

The Google Books project is controversial for content, copyright and political reasons. Under the auspices of cultural policy, the head of the French national library, Jean-Noël Jeanneney, pushed the controversy forward and advocated an alternative European offer.

On May 3, 2005, the EU passed a resolution for its own project, which is called the European Library . In German, “European Digital Library” is also common, Jeanneney uses “Bibliothèque Numérique Européenne”, abbreviated to BNE.

In an official reaction to the EU decision, the German government has given the Deutsche Bibliothek , which belongs to its area of ​​responsibility, responsibility for the further course of events. The declaration culminates in the key phrase "A digitized cultural heritage ... will help to make Europe's cultural diversity, research and science visible when searching the Internet."