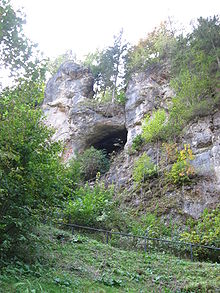 Entrance area of ​​the giant castle (Verurzhöhle) near Doos

View inside the giant castle

The Riesenburg is a natural karst cave ruin near Engelhardsberg , a district of the Upper Franconian community Wiesenttal in the Forchheim district in Bavaria .

It is located near Doos in the Wiesent valley and represents the remains of a larger karst cave made of Franconian dolomite, which was created by the action of water.

In the southern German White Jura , all of southern Germany lay in the area of ​​a shallow sea for about 161 to 150 million years. During this time, due to the constant subsidence of the crust, massive rock sequences were deposited on the sea floor. Today the Jura sediments form the largest part of the rocks occurring in the Franconian Jura and are also the basic material of the giant castle.

The sea retreated due to uplifts of the European continental plate towards the end of the Upper Jurassic and larger areas became mainland at the beginning of the following Cretaceous period. During this time there was a tropical climate and intensive weathering of the limestone and dolomite rocks that had previously formed. This karstification created the underground cavity of the giant castle. The cave, which may have already existed in the Upper Cretaceous period , was then almost completely filled with washed-in loamy sediments. During this time, another sea pushed forward into the area of ​​the Franconian Alb.

After the sea had receded, the Wiesent River, which was then higher up, was able to flow into the cave, widened it and carried away the deposited sediments. As a result, the surrounding rocks and the cavity filling that had previously stabilized the cave were missing. This at some point created instability in the ceiling and it almost completely collapsed. The existing three arches, some over ten meters high, represent the rest of the former cave roof. One of the arches is accessible via a path.

In the Tertiary , regional uplift resulted in a renewed sea decline and partial exposure of the Jura landscape.

Extensive overhangs, so-called balms, have also been preserved; they are now the habitat of unique plant communities, the so-called balm corridors.

A smaller cave (C 82) is located a little below the giant castle.

The cave, which is 4.5 kilometers upstream from Behringersmühle in the Wiesent Valley, can be reached via State Road 2191. From a parking lot at the foot of the Riesenburg you can reach the Versturzhöhle in about five minutes, following the stairs.

Before it was discovered by tourists, it was known as the “Goat Church” because of the sheep and goats that grazed there.

Near the cave, a path leads from the Wiesent up to Engelhardsberg, where water was fetched for the place from the Middle Ages to the First World War .

At the time of the Romantic era, the giant castle came into the interests of the people. The giant castle was bought by Count Franz Erwein von Schönborn , who had the previously treeless slopes afforested in order to increase the romantic effect. He also made the giant castle accessible through paths and stairs. This happened on the occasion of a visit by the Bavarian King Ludwig I , who visited the cave at the beginning of the 19th century. A two-line text carved into the rock by the king at the viewpoint above the cave commemorates this visit:

"Following the wind, the clouds come to the rock and give way, but the rock remains unchangeable in time."

Other well-known visitors to the Riesenburg were the freedom poet and patriot Ernst Moritz Arndt in 1798, the cave explorer Johann Christian Rosenmüller in 1804, the naturalist August Goldfuß in 1810, the historical researcher Joseph Heller in 1829 and the Dresden painter Ludwig Richter in 1837 They paid tribute to the giant castle in texts and pictures.

The forested condition of the 19th century has been preserved to this day. Only the Versturzhöhle itself was cleared to allow visitors a clear view from the street. Due to its convenient location, the Riesenburg is a well-visited attraction in Franconian Switzerland. Above the giant castle is a lookout point over the Wiesent valley.

The cave is registered as C 38 in the Franconian Alb cave cadastre (HFA). It has been designated as an important geotope (474R064) and a natural monument (ND-04584) by the Bavarian State Office for the Environment . Due to finds from prehistoric times, it is also designated as a ground monument (D-4-6133-0102). The giant castle received the official award as one of the 100 most beautiful geotopes in Bavaria .