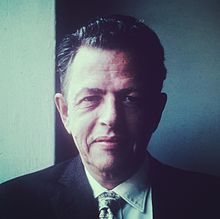 Robert Ardrey (born October 16, 1908 in Chicago , Illinois , † January 14, 1980 in Kalk Bay , South Africa ) was an American playwright , screenwriter and anthropologist who went through an academic training in anthropology and behavioral research in the 1950s . Two of his most-read works are African Genesis (1961) and The Territorial Imperative , which, alongside Desmond Morris ' The Naked Ape (1967), sparked a public debate in the 1960s as they challenged earlier anthropological assumptions. Arthur C. Clarkes and Stanley Kubrick's 2001 film : A Space Odyssey was just as influenced by Ardrey's ideas as Sam Peckinpah , to whom the American actor Strother Martin gave copies of Ardrey's books.

Robert Ardrey's father was the editor and publisher Robert Leslie Ardrey, his mother Marie was born Haswell. Adrey was a graduate of the University of Chicago in natural and social sciences from 1927 to 1930 , where Thornton Wilder was his mentor . In 1937 and 1938 he held a Guggenheim fellowship . He was a member of the Phi Beta Kappa and the Royal Society of Literature .

His professional career began with Ardrey writing dramatic plays such as Star Spangled (1936), Casey Jones (1938), Thunder Rock (1939) and Jeb (1946). As early as 1940 he wrote his first screenplay They Knew What They Wanted , which was followed by other screenplays, including The Green Years (1946), based on a novel by AJ Cronin , The Three Musketeers (1948), based on Alexandere Duma 's novel of the same name , Madame Bovary (1949) based on the novel by Gustave Flaubert , and The Four Horsemen of the Apocalypse , 1962. Ardrey was nominated for an Oscar for his 1966 screenplay for the monumental film Khartoum . Two novels are also among his works: World's Beginning (1944) and Brotherhood of Fear (1952).

From the beginning of the 1960s, Ardrey shifted to writing non-fiction books in the field of paleoanthropology . He made the claim that aggressive behavior was an essential feature in human evolution. In his Hunting Hypothesis, Ardrey Raymond popularized Dart's model suggested in his book Adventures with the missing link - hunting as the key to human incarnation - by depicting the ancestors of Homo sapiens as ruthless beings who kill other hominids and would eat.

Ardrey was married to Helen Johnson from 1938 to 1960, with whom he had two sons, Ross and Daniel. Shortly after his divorce in 1960, he married the South African theater actress Berdine Grunewald, who later also illustrated his books. Ardrey, who had lived in Italy for over 15 years , spent the last two years of his life in South Africa.