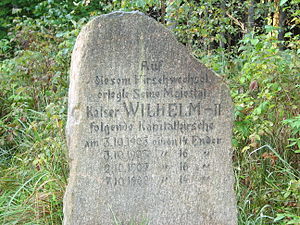 Memorial stone to the imperial hunts in the Rominter Heide near Warnen (photo: September 2010)

The Romincka Forest or Romintensche Heide ( Russian Красный лес Krasny les or Роминтенская пуща Romintenskaja Pushcha , Polish Puszcza Romincka ) is a 210 km² hills, woods - and heathland in the southeast of the Russian Kaliningrad Oblast and in the northeastern Polish Warmia and Mazury . In the geomorphological classification of Poland it is a mesoregion of the macro-region of the Lithuanian Lake District .

The Rominter Heide is named after the village of Rominten , which in turn is named after the Rominte river . The German name and the Polish name, like the river name Rominte and the place name Rominten, are derived from the Prussian ( Old Prussian ) syllable "rom", which means "quiet, calm, holy". This is associated with pagan cult . The Russian name Krasnij Les means "red forest".

The Rominter Heath, which extends over more than 25,000 hectares, is traversed by the Rominte River ( Krasnaja in Russian , Błędzianka in Polish , Rominta ). On the western edge of the Russian part of the area is the village of Krasnolessje (formerly (Groß-) Rominten , renamed Hardteck in 1938 ), in the southern part, close to the Polish border, the local office of the former village ( hunting lodge) Rominten (Russian: Радужное / Raduschnoye ). - In the Polish part there is the place Żytkiejmy ( Szittkehmen , renamed in 1938 in Wehrkirchen ) and the health resort Goldap . The Goldaper See borders in the south-west . In the east on the border with Lithuania is the Wystiter See , to the west of it the Wystiter Hügelland .

The Rominter Heide was traditionally a popular hunting area for the Prussian rulers. Over the centuries the hunter-hunting interest of the Brandenburg-Prussian Hohenzollern was in the particularly capital of the red deer , but until the eighteenth century also the numerous brown bears. After hunting was released as a result of the German Revolution of 1848/49 , the red deer population under the care of Prince Friedrich Karl Nikolaus of Prussia had recovered significantly in the second half of the 19th century. In the middle of the Rominter Heide, near the village of Theerbude , which was renamed "Kaiserlich Rominten" in 1897 , stood the Rominten hunting lodge, built in Norwegian style by Kaiser Wilhelm II, with an adjacent chapel. It was dedicated to Hubertus von Lüttich , helper in need and patron saint of the hunt. In contrast to the community (Groß-) Rominten on the western edge of the heath, Imperial Rominten was only a forest district with 390 inhabitants in 1911.

After the emperor's abdication, "Imperial Rominten" became the "Jagdhaus Rominten" village , in which the Rominten forest ranger was also located. The other three Prussian chief foresters responsible for Rominter Heide were to the northwest in Warnen (Russian: Озерки / Oserki), northeast in Nassawen (Russian: Лесистое / Lessistoje) and east in Szittkehmen (Polish: Żytkiejmy). After the imperial court hunting ground in the Weimar Republic had become a Prussian state hunting ground, Prime Minister Otto Braun often went hunting.

On August 16, 1919, the auxiliary forester Oskar Kahnert , who lived in Jörkischken ( Jurkiszki ), was shot by poachers. In 1920 the Wiechert brothers who had been convicted of the act were convicted. Otto Wiechert, who fired the shot, received a long prison sentence. A memorial stone was placed in Rominter Heide to commemorate the event.

At the time of National Socialism , the Rominter Heide was seized by "Reichsjägermeister" Hermann Göring . He had the " Reichsjägerhof Rominten " built as his own domicile on the steep slope above the Rominte, just under two kilometers north of the old imperial hunting lodge . At the international hunting exhibitions in Berlin in 1937 and Düsseldorf in 1954, special shows on Rominter Heide took place, each of which was designed by Walter Frevert (1897–1962), the last chief forester on Rominter Heide. The focus of both shows was on the herding and hunting of red deer and the presentation of capital stag antlers.

The East Prussian State Museum in Lüneburg dedicates part of its collections to the Rominter Heide hunting area . There and in the German Hunting and Fishing Museum in Munich hang some of the capital Rominten deer antlers. Artistic depictions of the red deer from Rominten come from the hunting painters Richard Friese (1854–1918) and Gerhard Löbenberg (1891–1967).

Today hunting tourism is gaining importance again in the region, 2/3 on the Russian side and 1/3 on the Polish side.