This article covers the place. For the river, see Gołdapa .

The city is located about 130 kilometers southeast of Kaliningrad (Königsberg, Russia) and about 200 km southwest of Vilnius (Wilna, Lithuania) on the border with the Kaliningrad Oblast (Königsberg area) in historic East Prussia . There it is located on the northern foothills of the Seesker heights on the little river Goldap ( Gołdapa ), near the forest, low mountain range and heather area of Rominter Heide (Prussian ram, rom : quiet, holy).

In addition to Gołdap itself, the urban and rural municipality includes the following surrounding villages:

The name is derived from the Prussian galdape , which means river in the hollow . The Goldap is a river that rises as Jarke in the southeast of the Seesker ridge , then flows into Lake Goldap and then leaves it as Goldap .

The later district of Goldap was not settled as planned until 1535.

On May 15, 1570 the city of Goldap was founded by Kaspar von Nostitz . Up until the 17th century, the city on the eastern border of Prussia suffered constant attacks from the east.

In 1657 the city was burned down by the Tatars . Many citizens are said to have been abducted or killed, and Mayor Dullo was publicly roasted on a spit alive at the market. In 1694 the city burned down again.

From 1709 to 1711 East Prussia was hit by a plague epidemic. Immigrants from Brandenburg , Pomerania , Magdeburg , Halberstadt , from the Palatinate and the Duchy of Nassau , Germans and Swiss, Prussians and Lithuanians replaced the dead population. From 1732 onwards, exiles from Salzburg came who were expelled for religious reasons. After the Second Silesian War , the city became a garrison town of the "Black Hussars ". After the third fire in 1834, there was hardly anything left of the original arbor houses.

On September 29, 1818 Goldap was declared a district town for the district of Goldap and an open city after its four gates were lifted .

On October 16, 1834, a devastating fire broke out in Goldap, through which 266 buildings, including the town hall, the court house, the old school next to the old church, the judicial prison and 112 private houses were cremated.

From 1887 the Rominter Heide served as hunting ground for Wilhelm II , who had a Norwegian-style house (Jagdhaus Rominten) and a stave church (the Hubertus Chapel) built there.

At the beginning of the First World War in 1914, Goldap was destroyed and occupied by the Russian army. After the withdrawal of the Russian army, the city was rebuilt in the " New Objectivity " style. The place was the seat of the district Goldap.

Towards the end of the Second World War , the townspeople were evacuated on October 21, 1944. The following day the city was occupied by the Soviet army . After heavy fighting, however, the German Wehrmacht managed to retake the city on November 15th. German propaganda celebrated the victory. A few days after the start of the winter offensive in 1945 by the Red Army, however, on January 18, 1945, the final conquest of the city, which was now 90% destroyed.

After the end of the war in 1945, Goldap and the southern half of East Prussia were placed under Polish administration. The spelling of the place name was changed to Gołdap . As far as the people had not fled, they were in the period that followed expelled and replaced by Poles.

The northern part of the district of Goldap with most of the Rominter Heide, however, was placed under Soviet administration. From then on, Gołdap was only around three kilometers from an almost impenetrable border and suffered from its remote location in the border area.

With the opening of the border after 1991, the city became a border trading place. Since 2002 the Gołdap has again been the seat of a district of the same name .

Goldap was known, among other things, for large cattle and horse markets and the second largest marketplace in East Prussia (and Germany). Goldap was famous for its cloth makers, hat makers, stocking knitters, tanners and bakers. A few tons of Goldaper rings and pretzels were even exported to Batavia (Jakarta). Goldaper mead was also famous. "The inhabitants of the city have the name piglet makers because a malicious painter knew how to cleverly underlay a sow with piglets painted in oil to the actual coat of arms of the city, which he painted in watercolors".

Expression: “Goldap burns” when you urgently need to go to the toilet. 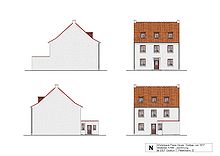 After the destruction during the First World War, a "East Prussia reconstruction program" was carried out, in which the architects Hans J. Philipp and Fritz Schopohl played a major role. The external design of the new houses was based on the well-known architecture of East Prussia: a pan roof on inverted formwork, in the countryside mostly rough trowel plaster, in the city scratch plaster . The windows were painted dark in the fixed frame and white in the sash wood. The buildings were built on the foundations or basement walls of the destroyed houses, but the size of the new buildings was often changed by different floor plans. A typical building from the East Prussian reconstruction program is / was the "small bourgeois house" by Franz Hoyer, which was designed as a terraced house. 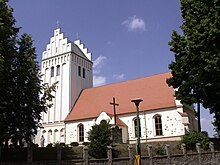 On May 14, 1570, the land was written for the first church building, which began around 1580 and was completed after more than ten years. After a fire in 1623, the nave was rebuilt from field stones and bricks in the years up to 1627. This building stood until 1944, even if a hurricane in January 1818 caused even greater damage. In the pyramidal closed tower there were two bells from the years 1635 and 1705. Inside the church there was a pulpit altar by the sculptor Pfeffer from Königsberg .

The old church was badly destroyed during the fighting for Goldap in 1944/45. In the early 1980s, it was rebuilt in the original architectural style, and in 1984 the church, previously a Protestant church, was now consecrated by the Roman Catholic Church with the name Najświętszej Maryi Panny Matki Kościół . It has been a co- cathedral in the Diocese of Ełk since 1992 .

On the site of an earlier reformed and garrison church , General Daniel Friedrich von Lossow built a new church building in 1778. Until 1817 it was a reformed church. Due to dilapidation, the church had to be closed in 1842. In 1856 a new building took place on the Goldaper market: a neo-Gothic brick shell with a high tower. In the chaos of war in 1944/45 the church was destroyed and burned down except for the tower. The tower was demolished in 1956. The church was not rebuilt.

The Leo Church ( Kościół św. Leona ) is a building from 1894 that has always been a Catholic place of worship and still is today. The building survived the war almost unscathed.

The youngest church among the Goldaper churches was taken over in 1991 and named Kościół św. Jozefa Robotnika consecrated. Today it is the third Catholic church in the city.

Until 1945 there were two Protestant parishes in Goldap, which were assigned to the old and the new church. In earlier times the services were held in German, Lithuanian and Polish, later only in German. The Lithuanian parish was provided by the first pastor, the Polish parish by the second pastor (deacon) of the Old Church. In 1890 there were 6,743 Protestant church members in the city, in 1939 there were 10,876. The district of the old church included the northern part of the city with twenty localities in the area, the southern part with nine parish places was assigned to the new church. Both communities belonged to the Goldap parish in the church province of East Prussia of the Church of the Old Prussian Union until 1945 .

Due to flight and displacement as a result of the Second World War , the number of Protestant church members fell to almost zero. In the post-war years, however, there was again a smaller Protestant community in Gołdap, which together with people from the surrounding area again created a center here. The Gołdap parish is a branch parish of the Church in Suwałki (Suwalken) within the Masurian diocese of the Evangelical-Augsburg Church in Poland .

For parish Goldap (Old and New Church) were before 1945 near the town of Goldap 30 places:

Until 1945 Goldap was the central location of a church district within the church province of East Prussia of the Church of the Old Prussian Union . Nine parishes were assigned to this church district, the last superintendent of which was the Goldaper pastor Wilhelm Krüger . The area of ​​the church district at that time is now intersected by the Polish (PL) -Russian (RUS) state border:

Today there are three Catholic parishes in Gołdap which belong to the Gołdap Dean's Office in the Ełk Diocese of the Catholic Church in Poland .

In addition to the three Gołdap parishes, four others from the surrounding area are assigned to the Gołdap Dean's Office:

Blazon : “Divided obliquely; Above, in silver, the red (Brandenburg) eagle, growing, the breast is covered with a silver "S", below it is slanted in black and silver. "

On May 14, 1570, Duke Albrecht Friedrich of Prussia awarded the city the above coat of arms, whereby it is strange that the red margravial eagle has "an S on its neck", as only the black Prussian eagle does as a sign of its dependence on King Sigmund of Poland had to carry.

One of the few preserved historical buildings in Goldap is the water tower built in 1905 by the Gdańsk company "AW Müller" , which was once part of the city's waterworks. The water tower is made of red fired bricks and is 46.5 meters high. It consists of seven floors and has a spherical roof with an attached lantern as a spire. The water tank that was once installed inside it held 250 cubic meters .

The water tower, which is located a little away from the city ​​center , survived both the First and Second World Wars almost unscathed. Only minor damage caused by projectiles from handguns damaged the masonry . Until 1986, when there was a crack in the water tank and the water tower had to be taken out of service, the residents of Goldap could be supplied with water via the water tower.

The water tower fell into disrepair by 2008 , when it was acquired by a private individual and extensively restored by 2009 . On July 17, 2009, the water tower was ceremoniously reopened.

Today the water tower is no longer used for water supply, but is one of the city's attractions. In the upper area of ​​the tower a café was built in over two floors , the upper floor being glazed all around and allowing a fantastic panoramic view. In addition, it is possible to walk around the tower completely outside of the café and also to climb to the lantern on the outside via a staircase. The ascent to the café can be done via a built-in elevator or stairs . Every single floor is dedicated to a topic area and furnished with a wide variety of historical documents , furniture or other objects. The checkout area and a small souvenir shop are located on the ground floor .

In 1879 Goldap was connected to the railway network when the Insterburg – Lyck railway was put into operation. This gave Goldap a connection to the Prussian Eastern Railway to Königsberg (Prussia) and Berlin . In 1897 the Angerburg – Goldap railway was opened , and four years later it was extended to the north on the Goldap – Stallupönen railway .

All lines of the former railway lines were abandoned due to the war and later also for reasons of profitability. Today Gołdap no longer has a rail link.