A glass of root beer 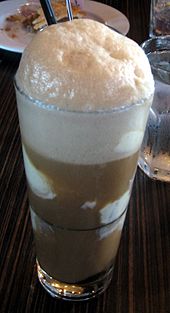 Root Beer [ ˈruːt.bɪər ] ( listen ? / I ; in German : "Wurzelbier") is a non-alcoholic , carbonated soft drink popular in the United States and Canada . In the Francophone part of Canada it is called Racinette [ ˈʁa.si.nɛt ] ( listen ? / I ; in German: "Würzelchen"), although another herbal drink originally had this name. A popular dessert in the United States is the Root Beer Float , which typically has vanilla ice cream floating in root beer . In older German dubbing of American films, the term root beer is often translated as "herb beer".

Root beer was first introduced commercially by Charles E. Hires in 1876 at the Centennial Exhibition . Originally he wanted to call the extract -containing drink root tea , but since his intended clientele were miners in the pits of Pennsylvania, he called it root beer . Charles Hires was a supporter of the abstinence movement , which is why there should be an alcohol-free alternative to beer. “ Root beer ” itself was already known in the 18th century, after Samuel Adams initiated the development of a non-alcoholic beer for his children. The original root beer is made from extracts of the root bark of the sassafras tree. Because of the carcinogenicity of the sassafras extract, only artificial sassafras aroma is used today. It has a very peculiar, extremely sweet taste . The main flavoring ingredient is wintergreen with the salicylic acid methyl ester it contains . Other recipes were slightly alcoholic and mainly consisted of juniper berries , vanilla pods , hops , bindweed and liquorice and were characterized by a medicinal, bittersweet taste. Successful marketing without the content of psychotropic substances was achieved by entrepreneur John Willard Marriott . In the meantime, due to the craft beer movement in the USA, alcoholic variants are also on the market, e.g. For example, Not Your Father's Root Beer from Small Town Brewery in Wauconda, Illinois.

Sales in North America and Europe

There are several hundred rootberry brands on the North American market, but as a soft drink they are often only of local or regional importance. The range of flavors is far greater, which is due to the ingredients used, the brewing method and regional preferences. The better-known national brands include the brands A&W Root Beer , Dad's Root Beer , Mug Root Beer and Barq’s . The latter was bought out in 1995 after a legal battle with The Coca-Cola Company .

In Germany, Root Beer u. a. manufactured by Temetum as a normal variant and in the variants Light and Mate . Root beer u. a. at the Kaufland retail chain , where the Tem's and Carter Root Beer brands are available. The brands A&W Root Beer and MUG Root Beer are also occasionally available.