Real licorice ( Glycyrrhiza glabra ) is a plant of the subfamily Schmetterlingsblütler (Faboideae) within the family of the Leguminosae (Fabaceae). Real liquorice is best known for the sweet liquorice obtained from the liquorice root . The plant is also used as a tea drug . The liquorice was also known as common , bald , Spanish or German liquorice.

The German name liquorice , like the generic name, goes back to the Latin glycyrrhiza , which is a loan word from the Greek glykyrrhíza from γλυκύς ( glykys , "sweet") and ῥίζα ( rhiza , "root"). With glycyrrhizium (Süßwurzel) was originally the dry root, then called the whole plant. The Latin name had already undergone a folk etymological change in Middle Latin under the influence of liquor ("liquid") to liquiritia , from which the German name arose.

Licorice is a perennial, herbaceous plant that reaches heights of 50 to 150 centimeters. The plant is branched. The stems and petioles are hairy or balding. The alternate and stalked leaves are imparipinnate with 9–17 pinnate leaves. The mostly entire, short-stalked leaflets are ovate to elliptical, about 2–5 cm long and 1.5 to 2.5 cm wide. They are rounded and sometimes briefly spiky at the front, pinnate-veined and dotted with sessile resinous-sticky glands on the underside. The stipules are small and sloping.

In late summer, bluish-purple and white butterfly flowers appear in short, upright, stalked clusters in the axils of the leaves. The butterfly flowers are 8–12 mm long. They are short stalked. The cup is bell-shaped for a short time. The calyx teeth are longer than the calyx tube and lanceolate, pointed. The petals that form the boat are not fused and not beaked in front. The individual flowers are underlaid by a short, pointed, sloping bract . The pods are up to 3.5 cm long and 4-6 mm wide. They are flattened, mostly bald or slightly hairy and relatively straight, as well as mostly more or less pointed, beaked . When ripe they are leathery and red-brown. When fully ripe, they jump up. Each pod contains two to eight round, smooth, about 2-3 mm large, slightly flattened and greenish-brown seeds. The roots are harvested in autumn. The flowering time is June to July, more rarely until autumn.

The liquorice is native to the Mediterranean region and western Asia. It is sensitive to frost and prefers full sun and deep, humus-rich , permeable soil. 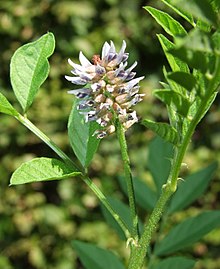 Real licorice contains glycyrrhizin , a mixture of potassium and calcium salts of glycyrrhizic acid. This glycoside , which gives liquorice its taste, has about 50 times the sweetness of cane sugar . By splitting off the diglucuronide , glycyrrhizin is converted into 18 β- glycyrrhetinic acid , which itself no longer has any sweetening power. Numerous triterpene saponins such as 24-hydroxyglycyrrhizin and soy saponins I and II are contained in low concentrations . Among other glycosides as Glabrinsäure and oleanolic acid derivatives containing licorice root more than 40 identified flavonoids . These include the chalcone derivative isoliquiritigenin and the corresponding 4-O-glycoside Isoliquirtin and flavanone Liquiritigenin and its glycoside Liquiritin . Isoflavones such as formononetin , or sterols and higher alcohols have also been detected. Furthermore, coumarins such as in umbellifers as lovage occurring umbelliferone included. Among other volatile flavors, anethole and geraniol have been identified. The acidic polysaccharide Glycyrrhizan GA is the main component of the further contained polysaccharides . 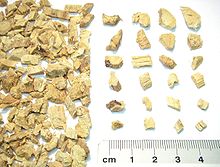 Grated liquorice root according to the Ph. Eur.

Licorice root acts due to the contained saponins, especially the glycyrrhizic , expectorant (expectorant), secretolytically (schleimverflüssigend) and sekretomotorisch (expectorant). An antibacterial and antifungal effect has been demonstrated in licorice extracts . Typical areas of application are cough, bronchial catarrh and other diseases of the upper respiratory tract.

Licorice root is also used for gastritis and stomach ulcers. The experimentally and clinically proven anti-inflammatory and antispasmodic effects are not yet fully understood. The proven anti-inflammatory effect of glycyrrhizic acid should not result from an inhibition of prostaglandin biosynthesis , but rather from an influence on the migration of leukocytes to the site of inflammation. In addition, glycyrrhizic acid itself influences the steroid metabolism by inhibiting the enzyme steroid 5 β -reductase ( EC  1.3.99.6 ) and possibly also the NAD + -dependent 11 β -hydroxysteroid dehydrogenase 2 . These enzymes break down cortisone and aldosterone , so their inhibition leads to a prolongation of the biological half-life of the corticosteroids and, in the case of high aldosterone levels, to high blood pressure and potassium loss .

For the treatment of chronic hepatitis and liver cirrhosis , glycyrrhizic acid is used in combination with glycine and cysteine ​​as an infusion in East Asia. For glycyrrhizin antiviral effect was hepatitis A and C occupied. Licorice sugar is also said to block the production of a herpes virus protein that normally prevents the cell from detecting the pathogen. Without this protein, the cells become aware of the intruder and initiate their own death. The dose required for this is, however, much too high to be achieved through normal (harmless to health) consumption of liquorice, and has not been demonstrated in living people, but only in cell cultures. Further research is also examining the antiviral effects on the herpes virus, which causes Kaposi's sarcoma .

In combination with ammonium chloride and anise oil , liquorice root extract is processed into salmiac pastilles . They were already described in Hager's Handbook of Pharmaceutical Practice from 1925 as "traditionally used medicinal products to dissolve mucus in the respiratory tract" .

Dried licorice sticks are also chewed for dental care, whereby in addition to the ingredients it contains, the property of the wood also comes into play: when chewed, it becomes very fibrous and thus forms a natural toothbrush.

Use as a luxury food

The root extract or the thickened juice of the root of real liquorice is used to produce liquorice or liquorice. It is mainly confectionery that is consumed in the form of sweet liquorice or salty liquorice. However, licorice can also be found in numerous other products, for example in alcoholic or non-alcoholic beverages (such as licorice liqueur ) and even in ready-made sauces; Licorice extract is also used in small quantities in spirits such as pastis . In the production of liquorice, the ingredients are extracted from the roots as raw liquorice and thickened, after which they are mixed with other ingredients.

The classic growing area is the Middle East.

In Germany, liquorice was previously grown in different regions, especially in the south, but cultivation has declined sharply and is now only operated by individual private individuals and in Bamberg by the Bamberg liquorice company.

The medicinal properties of liquorice roots were known in ancient times . The ancient Egyptians valued liquorice and knew a liquorice drink called Mai sus . Theophrastus of Eresus , who lived around 350 BC. Lived in BC, valued liquorice as a cure for coughs and as a thirst quencher. Liquorice is said to have been part of the standard equipment of the Roman soldiers. In his story of sweets , Tim Richardson points out that French and Turkish soldiers also carried liquorice in their packs during the First World War .

In Central Europe, liquorice has been known as a remedy since the Middle Ages. Falsified was liquiritia by mixing it with honey. In Great Britain liquorice thalers were made for therapeutic purposes. It was not until 1760 that a pharmacist named George Dunhill added sugar to the liquorice, so that from then on it was consumed as a sweet.

In the legendary Chinese pharmacopoeia Shennong Bencaojing , a liquorice root (甘草 gancao) was described in a prominent place. It should have a generally invigorating effect. Taken for a long time, it should make the body light and prolong life. In the 13th century, the doctor Li gao 李 杲distinguished between raw licorice root (生 甘草 sheng gancao) and roasted licorice root (炙 甘草 zhi gancao) in a book entitled Rules for Using Medicines (用藥 法 象 yongyao faxiang), which he assigned different strengths and different directions of action. This classification was emphasized in the official Chinese pharmacopoeia of 1985, where the raw root was recommended for general strengthening from the center (spleen / stomach), the roasted root was recommended for raising the qi 气 . In the scheme of the Chinese juice theory , liquorice root is classified as a general compensatory medicine (sweet taste and balanced temperature effect).