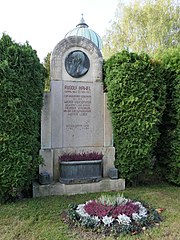 After a difficult youth, Hawel became a primary school teacher in Vienna. Among other things, he wrote poems, short stories, novels and dramas. Hawel was a popular, realistic narrator and an outstanding representative of the Viennese folk piece, who knew how to combine humor with social criticism in his works.

He rests in a grave of honor in the Vienna Central Cemetery (group 32 C, number 4).