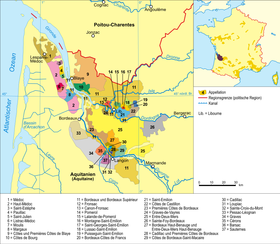 The Saint-Julien is one of the most famous red wines from the Bordeaux region .

The area of ​​the Appellation Contrôlée includes the locations of the commune of Saint-Julien-Beychevelle in the Médoc suitable for quality viticulture . It is about 10 km north of Margaux on the Gironde and borders directly on Pauillac in the north . With an extension of 3.5 to 4 km, it has an almost square shape. The cultivation area is 910 ha.

The Saint-Julien is a powerful and complex red wine. In its youth it often appears strict because of its high tannin content, only a longer maturation period of at least 5 years in the cellar allows it to develop. His character represents a synthesis between the force of Pauillac and the finesse of Margaux .

The eleven Grands Crus Classés account for 75% of the cultivation area . Their share is thus higher than in all other communal appellations of the Médoc. This fact gives the Saint-Julien its qualitative homogeneity. The most famous châteaux are:

Quality viticulture is limited to the gravel and sand soils that were created during the Ice Age. The locations closest to Gironde with their large pebbles are best suited for Cabernet Sauvignon. In the west of the municipality, the soil is more sandy, it meets the Merlot. From south to north the soil becomes more loamy, which gives the wines more body.

The climate is strongly influenced by the Atlantic with warm summers and mild, humid winters. As a rule, autumn decides the quality of a vintage . To be fully ripe, the grapes need sunny weather well into October. The proximity of the Gironde has a balancing effect on the microclimate. It protects against late frosts, but also softens the summer heat.

The Cabernet Sauvignon dominates the vineyards . Its share in the Crus Classés is usually 65 to 70%. Merlot accounts for around 20% , the rest is shared by the Cabernet Franc and Petit Verdot grape varieties . The yields are between 45 and 55 hl / ha.

The winemaking follows the classic Bordeaux model : two to three weeks standing on the mash , then 18-24 months aging in barriques , barrels with 225 liters made of oak wood, half of which are replaced. In the Grand Vin , only the wine comes from the best batches that match the style of a château . The rest, as well as the earnings of young vines, is from the château as a Second Vin , as a second wine bottled.