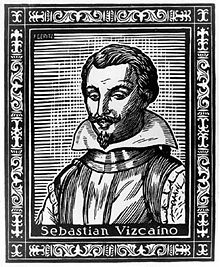 Sebastián Vizcaíno (* 1548 in Extremadura , Spain , † around 1615 or 1625 in Mexico City ) was a Spanish explorer , soldier and diplomat who mainly toured areas in Mexico , California and Japan .

Born in Extremadura, Vizcaíno joined the Spanish Crown as a soldier. It was first used during the invasion of Portugal by Spain in the years 1580 to 1583. After that, in 1586 he went to the Spanish colonies of New Spain . As a trader he traveled from 1586 to 1589 on the Manila galleon from the New Spanish port of Acapulco to the Philippines .

Vizcaíno was in 1593 on the west coast of the coveted permission, Gulf of California , the pearl fishing to operate. In 1596 he sailed with a fleet of three ships to the southern tip of the Baja California peninsula and named the area La Paz . Vizcaíno tried to found a settlement there. However, due to insufficient supplies and the associated decline in the settlers' morale, this did not succeed and the attempt was soon abandoned after a fire.

In 1601 the Spanish viceroy in Mexico City, Gaspar de Zúñiga y Acevedo , appointed Vizcaíno to lead an expedition to find safe ports along the coast of Alta California , which Spanish galleons could call at on the voyage from Manila to Acapulco . He was also commissioned to accurately map the California coastline explored by Juan Rodríguez Cabrillo 60 years earlier. On May 5, 1602 Vizcaíno started the expedition with three ships, the flagship San Diego as well as the San Tomas and the Tres Reyes . On November 10, 1602 he reached San Diego Bay , which he gave its current name. Following the California coast further north, Vizcaíno gave many prominent landmarks their current names, such as Point Lobos , Carmel Valley , Monterey Bay , Sierra Point and Coyote Point . In some cases he ignored designations that had previously been made by Cabrillo.

The Tres Reyes was separated from the other two ships on the voyage and sailed under her captain Martin d'Aguilar to the coast of what is now Oregon .

In 1611 Vizcaíno traveled to Japan as the Spanish envoy from New Spain to thank the Japanese government for the good treatment of the former governor of the Philippines, Rodrigo Vivero y Velasco , who was shipwrecked off Japan in 1609. Vizcaíno was accompanied by a Japanese delegation who had brought a message from Luis Sotelos to New Spain. In Japan Vizcaíno spoke to both the reclusive old shogun Tokugawa Ieyasu in Sumpu and his ruling son Tokugawa Hidetada in Edo , whom he alienated with his refusal to submit to their court ceremonies . He also met Date Masamune , the powerful daimyo of Sendai , who was friendly towards the Christian missionaries. The aim of the Spaniards was to obtain the expulsion of all Protestant merchants (English and Dutch) from Japan.

From Japan, Vizcaíno tried to find the fairytale "gold and silver islands" that were supposed to be east of Japan. However, his ship, the San Francisco , was unseaworthy due to a storm and he had to return to Uraga in Japan. The attempt made the following year to reach New Spain on a Japanese ship failed and he went back to Uraga again.

Now Date Masamune had a new ship built. The 500 ton galleon was completed in 1613 and baptized with the name San Juan Bautista . On the ship Vizcaíno sailed back to New Spain. He was accompanied by an embassy from Date Masanume under Hasekura Tsunenaga , which was supposed to visit the Spanish king in Madrid and the Pope in Rome via New Spain . With his knowledge and experience in navigation, Vizcaíno is said to have contributed to both the successful construction of the ship and, ultimately, the successful journey of the embassy.

On his trip to Japan, Vizcaíno published a paper entitled Report on the Search for the Gold and Silver Islands . In 1614 he temporarily withdrew into private life in Spain, but then died in Mexico City in 1615 during a new military mission to defend Acapulco against the Dutch.