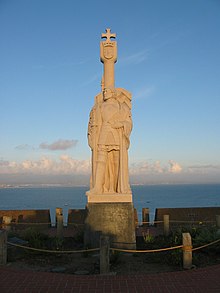 Juan Rodríguez Cabrillo or after the Portuguese spelling João Rodrigues Cabrilho (* around 1499, † January 3, 1543 ) was a Portuguese explorer in the service of Spain. He died in 1543 on the island of San Miguel from the effects of gangrene .

Little is known about Rodríguez Cabrillo until he appeared on the lists of Hernán Cortés ' army in 1519 . In 1520 he came as a soldier from Cuba to Mexico under the leadership of Pánfilo de Narváez . After defeating the Aztecs , he joined various military expeditions in what is now southern Mexico, Guatemala and San Salvador . As a wage he received land in Guatemala, where he made wealth through gold mining with the help of Indian slave labor. In 1532 he sailed to Spain , married Beatriz Sánchez de Ortega and returned with her to Guatemala. From this marriage two sons were born. He established himself as a businessman in Guatemala by trading along the Pacific coast using ships built by Spanish craftsmen.

Pedro de Alvarado , Guatemala's governor at the time, commissioned Cabrillo to build ships and assemble the necessary equipment to undertake an expedition along the north coast of New Spain (now California ). After Alvarado's death, the Viceroy of Mexico Antonio de Mendoza commissioned him to lead the sailing expedition as commander.

Cabrillo was supposed to seek a connection between the Pacific and the Atlantic Ocean. In addition, he was commissioned to search for the fabulous Seven Cities of Gold, also known under the name of Cibola , which are said to be near the Pacific, north of New Spain. Francisco Vásquez de Coronado , who had previously undertaken a land expedition to the areas in northern New Spain, had also been ordered to search for Cibola.

Cabrillo left the port of Navidad , near present-day Manzanillo in Mexico, on June 24, 1542. His expedition was armed for a period of two years and consisted of three ships, including the flagship San Salvador, which was designed by Cabrillo himself was.

On September 28, 1542, he was the first European to go ashore near San Diego at Point Loma and declared his discovery to be owned by the Spanish crown. He originally named this place San Miguel, but in 1602 it was renamed San Diego by Sebastián Vizcaíno . During his stay he made contact with the Kumeyaay - Native on. On October 3, the expedition left San Diego Bay. She reached San Pedro on October 6th, Santa Monica on the 9th , San Buenaventura on the 10th , Santa Barbara on the 13th and Point Concepcion on the 17th . Due to unfavorable winds, the ships turned around and anchored off the island of San Miguel . With a more favorable wind they reached Santa Maria on November 11th and a little later the Santa Lucia Mountains . The two ships were separated by a storm shortly thereafter, but met again on November 15 at Año Nuevo north of Santa Cruz . In the further course of the journey along the California coast they reached the height of San Francisco , but without discovering the Bay of San Francisco. On November 23, the expedition turned around and spent the next three months in winter quarters on the island of San Miguel. Here Cabrillo was seriously injured in a confrontation with Indians on December 24th and died shortly afterwards. The location of his grave is unknown, but there are suspicions that it is on Santa Catalina Island .

His crew continued the journey under the leadership of the first helmsman Bartolomé Ferrelo to the Rogue River in Oregon , until they had to return to Mexico due to lack of supplies and because of the onset of winter . They reached Navidad on April 14, 1543.

Exit of the expedition

According to contemporaries of Cabrillo, the expedition was viewed as unsuccessful and quickly forgotten. Original documents have not been preserved. In memory of the first European who reached the west coast of today's USA , the Cabrillo National Monument was erected and inaugurated on October 14, 1913 at this point in San Diego ( Point Loma ) .