Visus is a redirect to this article. Further meanings are listed under Visus (definition of terms ) . 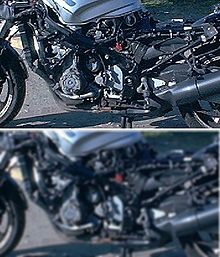 Sharp (above) and blurred image (below) to illustrate the different levels of detail. Visual acuity does not refer to the perceived sharpness of the picture; with reduced visual acuity, the image is z. B. not necessarily perceived as blurred.

With visual acuity (including visual acuity , visual acuity , Acies visus , minimum separabile ) refers to the extent of the ability of a living being , with its visual organ contours and pattern details perceive in the outside world as such. To clarify the term, it is necessary to distinguish between further essential features.

A measure of the (central) visual acuity in light is the visual acuity ; it is the reciprocal of the smallest recognizable gap in the standard test mark (the Landolt ring , see below). In humans, it is determined using an eye test . Even you can z. B. on clear-sighted double stars, the so-called eye testers .

Under minimum visibile means the limit of visibility . This is achieved when objects that are viewed and imaged on the retina are no longer delimited from the surrounding luminance as a contour and contrast . This means that the recognizability of external objects essentially depends on the ability of the visual system to perceive differences in brightness.

With minimum discriminibile is called the visibility threshold for small differences from foreign objects. In testing situations it is here, for example, to clarify whether it is while looking at a line to a solid line or a so-called Noniusanordnung is (Noniussehschärfe, Engl .: acuity Vernier or Hyperacuity ) whether a minimum change in position (movement) or a Change of orientation (tilting) of two objects to each other has taken place.

The minimum separable (synonyms: angular visual acuity , visual acuity ) requires, in addition to a relative localization, a separation of closely adjacent contours , which can just be perceived as separate due to minimal differences in luminance on the retina. The luminance distributions of the neighboring objects are superimposed the more closely the patterns in the outside space are next to one another.

This superposition causes z. B. the difference between the ideal visual acuity (in humans 0.5 to 2 ') and the practical recognizability of double stars (in so-called eye testers about 3 to 10'), depending on their brightness.

The minimum legible is reading visual acuity. It differs from the other visual acuity variants through the inclusion of stored forms of optotypes as word components. Therefore, their value is usually higher than the value of the other types of visual acuity, because here words are not only recognized, but also classified according to the sense of the context.

The dimensionless property of visual acuity is defined by setting the reference value 1 ′ in relation to the individual angular visual acuity.

Example: if a person can only separate points at an angular distance of 2 ′, they have a visual acuity of 0.5.

Instead of angles, distances can also be determined. If one chooses the distance d as the reference value  at which two points can be seen at an angle of 1 ′, then:

A percentage is often given to describe the visual acuity.

Such a statement seems easier to understand and is usually used for supposedly better communication with patients. On closer inspection, however, it is misleading; there are four problems:

However, the use of this percentage is also suggested by the fact that a resolution of 1 arc minute is within the normal range of every age group and therefore a visual acuity of "100%" can regularly be regarded as (still) normal. In German social law, regardless of age, a visual acuity of 1.0 is defined as not restricted .

Visual acuity is the most important determinable parameter of the sense of sight.

In ophthalmology, visual acuity is the target parameter, and most ophthalmological measures aim to improve or maintain it. Numerous legal regulations that determine the suitability for the operation of dangerous devices (e.g. motor vehicles ) or for certain professions ( e.g. police officer ) require certain minimum visual acuity values. Likewise, benefits from private and statutory accident insurance for eye damage and the payment of statutory blind allowance are primarily based on the visual acuity.

Not to be confused with visual acuity is the term clear visual range , also called reference visual range or standard visual range . It is set at 250 mm. The reference value is required, for example, to define the magnification factor of a magnifying glass . 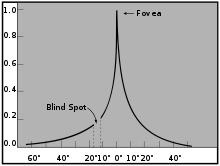 Visual acuity as a function of the retinal point (on the horizontal meridian and normalized to 1.0; the function corresponds to a hyperbola )

A person's visual acuity depends on:

The ability to describe the visual impression also plays an important role in the practical measurement of visual acuity.

The size of the eye pupil physically limits the resolution of the eyeball, physiologically it is the density of the receptors (rods and cones) and the signal processing by ganglion cells of the retina (see their receptive fields ). The resolution reaches its highest value when there is sufficient brightness in the center of the fovea centralis (“pit of vision”), ie with central fixation. The area of ​​highest visual acuity (the “foveal bouquet”) only covers about 8 to 16 angular minutes, so it is much smaller than the foveola , which measures about 1 °. From there it is a continuous decrease, for example in the form of a hyperbola (see illustration). With an eccentric fixation of about 1 °, the peripheral visual acuity has already decreased by half.

At birth, the child's visual acuity is not fully developed. Both the retina and the visual cortex develop in the first few years of life.

Landolt ring, according to DIN standard

The determination of visual acuity is usually done with methods of psychophysics . The subjects are presented with optotypes, and their answers show whether they recognized them correctly. In addition, there are also objective procedures that evaluate the involuntary reactions to decreasing stimulus patterns and thus allow an assessment of the visual acuity. This includes, for example, testing optokinetic nystagmus or preferential looking in small children and infants.

In Germany, the visual acuity is usually determined with the help of projected optotypes of defined size, brightness, shape and defined contrast. Using a projector instead of a board has the advantage of being independent of the test distance. DIN regulations exist for a reproducible visual acuity test. According to this, the standard optotype is the so-called Landolt ring , a ring of defined width with a gap of the same width that can be arranged in eight different directions. By recognizing the direction of the gap, the examinee shows that his resolution is at least equal to the width of the gap. In practice, however, standardized images of numbers are usually used as optotypes because they are easier to understand. There are other standardized optotypes, such as the Snellen-E , the Pflüger-E-Haken, in which the middle line is shorter, and others that are suitable for the visual acuity test of illiterate children and preschoolers as well as for non-verbal communication. Most chart projectors offer signs up to a vision level of 0.05 (corresponding to approx. 0.3 °). This is due to the increasing measurement inaccuracy with increasing visual impairment. For even lower visual acuity values, eye test tables are used (see below) or finger counting, hand movements and light sources.

With a visual acuity of less than 1/50 = 0.02 (determined with eye test tables) on the better eye despite optimal glasses or contact lens correction, a person is considered blind in the sense of the Social Security Code in Germany , for the World Health Organization (WHO) from a visual acuity of 3/60 = 0.05 or less.

When using eye test tables, due to the unchangeable size of the optotypes, care must be taken to adhere to the exact test distance. Furthermore, it is important to maintain the correct (very bright) lighting of the board, since visual acuity depends largely on the luminance of the white background. According to the DIN standard 58220 introduced in 2009, the test luminance should be 80–320 cd / m². A well-known eye test chart is the Snellen index , created by the Dutch ophthalmologist Herman Snellen , in which smaller letters and numbers have to be read. There are also various other boards here.

Eye test charts are calibrated to a standard distance. The visual acuity is determined by a break. The counter shows the actual distance, i.e. the distance from which the person examined recognizes the optotype. The denominator is the normal distance, the distance at which a person with a visual acuity of 1.0 could see the same optotype. The distance is measured either in the metric system or in Snellen in the English foot measure, which can be converted into each other. Visual acuity is often given as a decimal number. 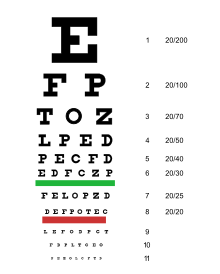 An example: If a patient recognizes a sign from a distance of 6 meters for which the standard distance is 30 meters, then his visual acuity is 6/30 or 0.2 .

Optotypes that are close to one another cannot be recognized as easily because closely adjacent contours impair the resolution ( separation difficulties or crowding ). With series optotypes, this can result in a deterioration of up to one visus level. In the case of amblyopia , nystagmus or insufficiently corrected ametropia , the differences between series and individual optotypes can even have very significant effects. With Landolt rings, a minimum distance of the optotypes from one another is prescribed from a visual acuity of 0.32 and for all larger optotypes, which should be greater than 35 angular minutes. This distance is outside the zone of contour interactions. With smaller optotypes from a visual acuity of 0.4, however, only twice the diameter of the Landolt ring is required as the distance between the optotypes. This puts them in the interaction zone. For this reason, special tests with Landolt rings (C-test) have been developed for clinical investigations, which clearly distinguish between individual and series optotypes. In the case of the individual optotypes, all optotypes are at least 35 angular minutes away from each other through all visual levels. In the case of the series optotypes, the distance through all visus levels is exactly 2.6 angular minutes. The test distance is 40 cm in both cases.

To assess whether the visual acuity of a test person is reduced due to refraction, i.e. due to an inadequately corrected ametropia , or whether this is caused by organic or functional problems, the use of a stenopean gap can be useful. One way of distinguishing organically caused visual impairments from functional ones is the so-called Ammann gray glass test .