This article covers the city; for the province see Sidi Ifni (province) .

Sidi Ifni ( Arabic سيدي إفني, DMG Sīdī Ifnī ; Tamazight ⵙⵉⴷⵉ ⵉⴼⵏⵉ) is on the Atlantic Ocean located Moroccan coastal town of about 25,000 inhabitants. It is nicknamed "Gate to the Sahara" (porte du Sahara ) . Sidi Ifni is the capital of a province and is located in the region Guelmim-Oued Noun .

Sidi Ifni is located on the Atlantic Ocean about 170 km (driving distance) southwest of Agadir at an average height of about 30  m . It is about 400 km to the northeast to Marrakech . The climate is strongly influenced by the Atlantic and the desert landscape of the hinterland; Rain (approx. 135 mm / year) falls almost exclusively in the winter half-year.

Official population statistics have only been kept and published since 1994.

The slight but continuous increase in the population is mainly due to the immigration of people, mainly Berbers , from other regions of the country.

The most important industry in the city was and is fishing . Eagle fish , sardines , sole , sea ​​bream , tuna and numerous other species are caught at the gates of the city . After the end of the only remaining fish factory in 2008, fish are only caught for personal use, the markets and the surrounding restaurants.

The city lacks employers. Small businesses and street vendors offer young people little career prospects. Due to the predominantly young population, there is high unemployment, which sometimes leads to greater tension. The closure of the last major local employer, the fish factory, sparked protests and riots in 2008 and ultimately led to confrontations with the police.

The opuntia and argan trees growing in the hinterland of Sidi Ifnis are also of economic importance . Cooperatives produce and market local products; the one in Tafyucht, near the small town of Meesti, produces argan oil and the Aknari cooperative, located near Sbouya, makes products from prickly pears . In order to market the cactus fruits, the Moussem Aknari festival has been held since 2013, usually in August , and is associated with an agricultural fair , equestrian games and the election of a "Miss Cactus".

Another industry is tourism. In summer - when the coastal fog keeps the temperatures low - Sidi Ifni is visited by many Moroccan tourists. The closest international airport to Agadir is around 170 kilometers away. There is a bus connection from there. From Guelmim, about 80 km away, you can fly to Casablanca or Laayoune.

Sidi Ifni is in the immediate vicinity of numerous more or less lonely sandy beaches. Numerous places have retained their wildness and unspoiled nature to this day. The beaches at Leghzira and Mirleft in the north and at Sidi Ouarzig in the south should be mentioned in particular.

In January 2009 it was decided to raise Sidi Ifni to the status of a province. Due to the new administration to be set up in the village, this will also entail the use of natural and local resources. In addition, social and economic life will be able to develop in a more sustainable and targeted manner.

Sidi Ifni was founded in 1934 as the successor to a base for slave hunting and fishing, called Santa Cruz del Mar Pequeña , originally set up further south around 1476 under the Governor of the Canary Islands , the Spaniard Diego de García Herrera .

Although Santa Cruz del Mar Pequeña was immediately secured with a fortress by its Spanish conquerors, it fell back into their hands around 50 years later after various uprisings by the local population of the Aït Baamrane tribe. The Spaniards gave up the place, it was subsequently forgotten.

In the Spanish-Moroccan treaty of 1767, the content of which was confirmed by a later one from 1860, Spain wrongly ceded a different area than the result of the treaties of Tangier, from which Spain could operate fishing and fish trade. In 1884 this area became a Spanish colony . Under Franco , this place was converted into a military base in 1934 and the city of Sidi Ifni was founded. This new city was to become the political center of Spanish West Africa and serve as a military garrison for the Spanish.

With the help of Spanish funds, the place developed quickly. Streets, avenues, central squares, barracks, jewelry buildings, hospitals and administrative buildings were built in Art Deco style according to a geometric master plan drawn up by the colonial rulers . Strengthening the infrastructure was a top priority and an airport (International Code: SII) and a fortified seaport were soon created. Almost 15,000 Spanish soldiers and military resided in Sidi Ifni with their families during these years. Leisure activities such as cinemas, the zoo, cafes or casinos offered enough variety.

Although the territory around Sidi Ifni was hardly pacified, Spain was able to hold Sidi Ifni together with Ceuta , Melilla and Western Sahara during Moroccan independence in 1956 . However, the hinterland of Sidi Ifnis was already occupied in 1957 by the “Moroccan Liberation Army” (Armée de Liberation Marocaine) ; as a result, the Ifni War broke out between Spain and Morocco. International pressure on Spain increased in the 1960s. Negotiations between Franco and Hassan II finally resulted in the Fez Treaties of January 4, 1969. Here the end of Spanish sovereignty was sealed and the withdrawal of Spanish troops and occupation was regulated. Ifni territory reverted to Morocco. Only a few Spaniards remained in Sidi Ifni. Maria Gomez, known as Maria, achieved a certain fame here, as the last Spaniard to die in Sidi Ifni in 2001. 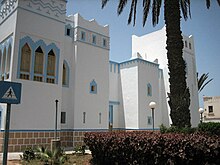 Sidi Ifni was built in a very short time by the Spanish in the 1930s. It is therefore not surprising that the old center of the city still looks as if it were made from one piece. Although often poorly maintained or slightly changed on the outside, the visitor still reveals the beauty of the entire Art Deco urban design, as it is seldom to be found today. Particularly noteworthy are the building of the 'Old Admiralty' in Streamline-Moderne style , the cathedral (today the court), the lighthouse, the governor's palace, the Twist Club and numerous residential buildings in the heart of the old town center. A particularly beautiful example is the Spanish square with the adjoining rue Sidi Mohammed , an avenue lined with palm trees with cubic houses and blooming gardens.

After the decision was made in 2008 to separate the provincial administration from Tiznit and to establish a province of Ifni, some of the old buildings will soon be given a new purpose and they will wake up from their slumber. In 2008, the old Sidi Ifnis center was also recognized by Morocco as worthy of protection and a protection zone was designated. These first steps indicate a change in Morocco's way of handling the cultural treasures left behind by the Spaniards. One difficulty still remains: after the abandonment of the enclave, Spain still owns some facilities and buildings in Ifni. This also includes the former consulate and the cathedral. Due to sensitivities and dissonances between Spain and Morocco, these buildings and facilities have not yet been used for any new purpose. A solution remains desirable for the development of the city of Sidi Ifni.

The film Un ange à la mer (“Angels by the Sea”), shot by Belgian Frédéric Dumont in 2009 in Sidi Ifni , received the “Crystal Globe” award for the best film at the 44th Karlovy Vary International Film Festival in the Czech Republic and the Actor Award for Olivier Gourmet. It was released in Belgian cinemas in early 2010.