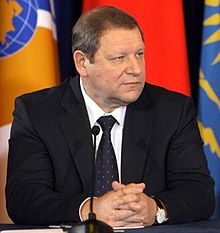 Sidorski is a qualified electrical engineer . He graduated from the Institute of Railway Engineering of the Belarusian SSR in 1976 . After graduating, he worked in the radio technology factory in his hometown Homel. By 1992 he rose from the master of an assembly hall to director of the entire company. In 1992 he became general director of the research and production association "Raton" . In 1998 he moved to the Executive Committee of Homelskaya Woblasz , where he was its deputy chairman. In 2001 Sidorski made the leap into the national political arena of Belarus as one of several vice-prime ministers. In 2003 he rose to be the first deputy prime minister. In the Belarusian government he worked in the field of economic, construction, transport and energy policy. In December 2003, Sidorski became Prime Minister of Belarus. After the presidential elections in December 2010, Sidorsky was replaced as head of government by Mikhail Mjasnikowitsch .

Prime Minister of Belarus since 1990