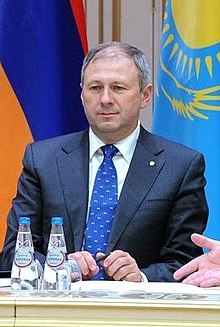 In the 1970s, his family moved to Minsk , where he attended school No. 44. In 1990 he graduated from the Yaroslavl Higher Military School of Finance A. Chrulev. In 1995 he graduated from the Academy of Management under the Cabinet of Ministers of Belarus. In 1995, Rumas headed Branch No. 7 (514) of Belarusbank and soon became the first vice-chairman of the bank's board of directors.

In 2001 he defended his thesis for the degree of Doctor of Economics. In 2005 he was appointed CEO of Belagroprombank. On January 28, 2010 he was appointed Deputy Prime Minister of Belarus and has been overseeing economic policy ever since. In autumn 2011, a draft for structural economic reforms was drawn up under the leadership of Rumas. The project was criticized by President Aljaksandr Lukashenka . In the same year Rumas was appointed president of Belaruskaya Federazyja Futbola.

On July 31, 2012, Lukashenka appointed him Chairman of the Board of the Belarus Development Bank. In 2013 he took part in the resolution of the conflict between Belaruskali and Uralkali . Rumas joined the Council for Entrepreneurship in 2017. As Prime Minister of Belarus, he has headed the Belarusian government since August 18, 2018 . On June 3, 2020, President Lukashenka dismissed the Rumas government.

Prime Minister of Belarus since 1990