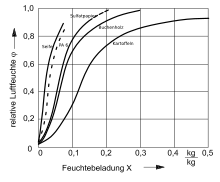 A sorption isotherm describes the equilibrium state of sorption of a substance at constant temperature .

With adsorption, there is an equilibrium for a substance (the adsorbate) between atoms / molecules that are in a gas phase or dissolved in a solvent and those that are adsorbed at an interface of the adsorbent (= adsorbent). Adsorption isotherms assign the amount of sorbate bound to the surface at constant temperature to its partial pressure in the gas phase or its concentration in the solution. Adsorption isotherms are determined experimentally by means of adsorption tests, i.e. an unloaded adsorbent is brought into contact with a gas phase or solution which contains the sorbate under consideration and the amount adsorbed as a function of the partial pressure or the concentration is determined. However, a simple experiment can i. d. Usually not differentiate between absorption and adsorption . When determining desorption isotherms , a loaded sorbent is brought into contact with an unloaded solution. If the adsorption and desorption isotherms are not identical, one speaks of a hysteresis of the adsorption / desorption. For some practical purposes, knowledge of this experimental dependency is sufficient for a specific adsorbent / adsorbate pair.

The most commonly used isotherms are listed below. There are numerous other models, which are often modifications of the models mentioned. In the examples given, adsorption from solution is assumed and the amount adsorbed is expressed as a function of the concentration. If, on the other hand, the adsorbate is a gas, we replace the concentration of the adsorbate, C, with its partial pressure in the formulas. The dimension of the parameters used in the isotherms changes accordingly. The amount adsorbed is usually given in one of the following two sizes.

In the u. a. Formulas are used as a measure of the amount adsorbed , but in the literature, with the same justification, the left of the equal sign is used instead of and the terms to the right of the equal sign are left unchanged. Numerical values ​​and dimensions of the corresponding parameters change accordingly. 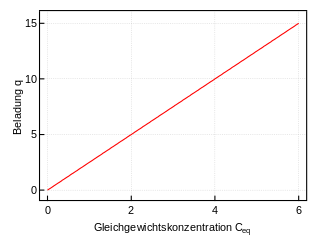 Linear isotherms are very popular because they greatly simplify calculations. Therefore, they are often used when actually more complicated models should be used. They can mostly only be used for the range of low concentrations.

Freundlich isotherms take into account the fact that less sorbate can be absorbed when the sorption surfaces of the sorbent are heavily loaded. However, due to the increase in loading according to a power law , a complete loading of the surfaces cannot be mapped. This is practically the case for isotherms in which the saturation pressure of the adsorbent is comparatively high or cannot be reached ( superfluid media ). The Freundlich isotherm is a special form of the Zeldowitsch isotherm.

Langmuir adsorption scheme. The active sites (red) are equivalent and can only be occupied monomolecularly. 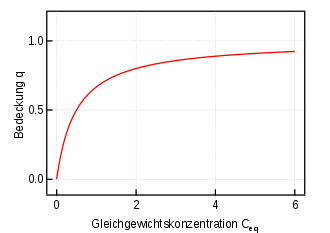 The Langmuir isotherm [ ˈlæŋmjʊə- ; according to the American physicist Irving Langmuir ] is the simplest adsorption model that describes complete adsorption on a surface. It is assumed that

The BET model [according to Stephen Brunauer , Paul Hugh Emmett and Edward (Ede) Teller ] extends the Langmuir isotherm by the behavior at high sorbate concentrations close to solubility or saturation concentration . The model is based on the assumption that an adsorption site can bind several, up to an infinite number of molecules. The load can therefore increase to infinity. The model is used for BET measurement in surface chemistry .

Other well-known models for describing the equilibrium of adsorption and desorption are the model by Dubinin or Dubinin and Raduskevic based on the potential theory, the Toth isotherm, which in the simplest case can be converted into the Langmuir isotherm, and the model by Talu and Meunier, with which, for example, the adsorption of water on activated carbon can be described.

Derivation of the Langmuir isotherm

There is a certain number of binding sites on the surface. We assume that each of these binding sites can either not be occupied by a molecule or by one molecule.

= the interface concentration of the free binding sites

The area balance results in:

The mass balance results in:

In the context of the Langmuir adsorption isotherm, values ​​between 0 and 1 can be assumed.

We describe the adsorption equilibrium using the law of mass action:

In practice, it is often determined from experimental adsorption isotherms by adjusting the parameters and K and the determination of and is dispensed with.

Consider a adsorption from from a solution, we replaced the partial pressure in the above equation , by the concentration of adsorbing substance in the solution . The dimension of the equilibrium constant K changes accordingly

Derivation of the Frumkin isotherm

In contrast to the previous derivation, we assume that the binding constant K depends on and can be described by the following function: through appropriate substitution in the Langmuir isotherm we get:

Derivation of the Brunauer-Emmett-Teller (BET) isotherm

In contrast to the Langmuir isotherm, we assume that each binding site can bind any number of molecules. Let it be:

The area balance results in:

Knowing the solution formula for the geometric series

The mass balance results in:

We can map the series contained in the last term to the geometric series :

Combining such as quantity and area balance, we get:

This equation goes over into the Langmuir adsorption isotherm. The equation above has a pole at. This meant

Usually the BET isotherm is written in the following form:

In practice, it is often determined from experimental adsorption isotherms by adjusting the parameters and K and using recognized values ​​for the gas used to determine the specific surface area of the adsorbent. At