In sport, a game plan is a plan established before the start of a season or a tournament that regulates the order in which the participants or participating teams play against each other. A basic distinction is made between two types:

Tournaments such as the soccer world championship are an example that both types can occur in a competition. There, the participating teams are first drawn into eight groups of four teams, each of which compete against each other once in a group. Then the two group winners advance to the round of 16 and from there play the winner in the knockout system.

This is the Bundesliga soccer schedule for the 2005/06 season, selected by the DFL from several options created by a computer program:

In the first step, each of the 18 teams except one, the "Joker" (in this case Hamburger SV ) is assigned a random number between 1 and 17, whereupon the "Joker" itself receives the number 18:

In order to find out which of these seventeen teams has to compete against which opponent on which game day, the following calculation rule is used: 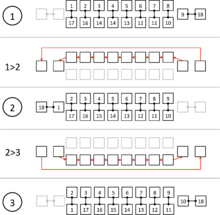 On game day n (here: 1 ≤ n ≤ 17 ) the club with number k competes against exactly the opposing team with number l , so that the remainder of the sum of both numbers k + l when divided by 17 results in exactly the remainder n . The “Joker” with the number 18 (in this case Hamburger SV) finally competes against the club for which, according to the above rule, no partner can be found on the relevant game day.

The process becomes understandable if it is implemented graphically. The basic scheme is shown in the graphic on the right. Two rows of 8 places and two places each to the left and right of them are provided for the clubs. The numbers of the clubs are entered in ascending order starting with 1 in the top left, continued in the middle right field and completed in the bottom row from right to left. The "Joker" is entered in the right middle field. The two fields in the middle left initially remain empty. Pairings take place between the clubs, which are connected by a line in the graphic. In the initial filling, this corresponds to the first game day. In order to determine the second and all even game days, the top row with the adjacent middle fields is moved to the left and the "Joker" changes sides from right to left. This occupies the two spaces on the left that are initially free; the two fields on the right are now free. In order to determine the third and all odd game days, the bottom row with the adjacent middle fields is shifted to the right and the "joker" changes from left to right. The free fields also change here. One can clearly see that for the pairings of the two clubs standing on top of each other, the division remainder of 17 always corresponds to the match day. 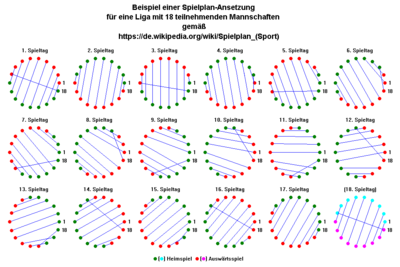 Bundesliga soccer schedule according to the algorithm explained on the right

As an example, the tenth day of the season. Because the remainder of 27 also equals 10 when divided by 17, it consists of the games

A simple rule of thumb arises in the event that one would like to know about the games on the next match day on a game day without knowing the game schedule. If you remember the order of the seventeen teams, you can determine the opponent for the next week for any club by simply going one number on the list from today's opponent. If your own club turns out to be an opponent, you play against the "Joker", ie Hamburger SV.

In principle, such a game plan could also be created randomly , but in practice this is seldom and no longer possible from certain team numbers. Too many external influences such as concerts in the stadiums or major events in their vicinity prevent possible fixtures, so that ultimately only a very small percentage of the theoretically possible plans make it onto the shortlist for the actual fixture list. The creation of the schedule for the German Bundesliga has been supported by the IBM software ILOG since the 2005/2006 season.