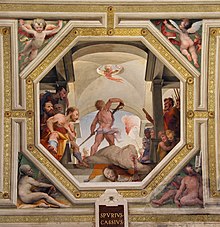 Spurius Cassius is executed by his father. Ceiling fresco in the Sala del Concistoro in the Palazzo Pubblico of Siena , created by Domenico Beccafumi between 1529 and 1535.

Spurius Cassius Vecellinus , also Vicellinus († 485 BC), was in the years 502, 493 and 486 BC. BC Roman consul . He is the only patrician from the Gens Cassia mentioned in the legendary tradition . He was executed in the year of his third consulate.

The tradition about Vecellinus hardly allows any conclusions to be drawn about the actual circumstances of his political career and his fall and is also extremely contradictory. The historians Dionysios and Valerius Maximus report that Vecellinus forced the Sabines to peace through a campaign and then held a triumphal procession . Titus Livius , on the other hand, reports of a war against the Aurunkians that began in 495 BC. Is mentioned again. Livius, Dionysius and Eutropius name Vecellinus as Magister equitum under the dictator Titus Larcius , i.e. in the year 501 or 498 BC. Chr.

Vecellinus appears at Dionysius in 498 BC. As a speaker in the Senate , during his second consulate he did a lot to end the secession of the plebs and dedicated the Ceres Temple. Of this information, only the temple consecration is supported by independent research: a plebeian mint master named Cassius later referred to it.

Earlier research considered the identity of Vecellinus as the founder of the federal treaty between Rome and the Latins to be historically unobjectionable, while it is now predominantly assumed that this foedus Cassianum only occurred after the Celtic invasion in the 4th century BC. Was closed.

During his third consulate in 486 BC. BC he went to the field with his colleague Proculus Verginius against the neighboring tribes of the Volscians and Hernics and won. The historians do not agree on the treatment of the defeated opponents: Dionysius and Valerius Maximus mention a triumphal procession, while Livy (and Dionysius elsewhere ) report the conclusion of a foedus aequum (alliance with equal rights).

Livius and Dionysius each offer two versions of the end of Vecellinus: one according to tradition, one with historical evaluations and digressions that are to be regarded as speculation. Livy’s report has Vecellinus expropriate two thirds of the hernic’s field marrow in order to distribute it equally to the plebeians and the Latins. Patricians and plebeians alike are outraged about this. After the end of his consulate, Vecellinus is brought to justice, sentenced and executed by the Quaestores parricidii ; his house is destroyed and a temple of Tellus is built in its place . In Dionysius, the land cessions of the hernians, who receive an equal alliance, are missing; Vecellinus is overthrown from the Tarpeian rock by the quaestors . In the second version, Vecellinus is accused by his father of being a traitor, holds court over him and punishes him with death. He has the son's house and land consecrated to Ceres ; With the proceeds he donates a statue, the inscription of which is mentioned by both Livy and Dionysius. This report is also preserved in the Naturalis historia Pliny the Elder (XXXVI 15), as well as in Valerius Maximus. The other sources ( Florus , Ciceros De domo , Valerius Maximus VI, Cassius Dio ) no longer reveal the figure of Vecellinus. Lucius Calpurnius Piso reports in Pliny Naturalis historia of a statue that Vecellinus erected at the temple of Tellus and which was melted down as evidence of his striving for rule.

There are three stages in the development of the tradition, which roughly correspond to the three main phases of Roman annals . The oldest historians recorded the folk tradition, which was based on the inscription: Vecellinus sought the crown and was therefore condemned and executed by his father, who consecrated his residence to the deity. Piso took offense that Vecellinus should still have been in the paternal power. That is why he only had his father testify against him, the accusation by the quaestor and the condemnation by the people, and perhaps first spoke of the agricultural law of Vecellinus (under the impression of the reform attempts of the Gracches ). The annalists of the Sullan era completely got rid of the father and placed the main emphasis on the stated reasons for the catastrophe.

All accounts of Vecellinus agree only that he was suspected of seeking autocracy and that he was therefore executed despite his previous services to the state.