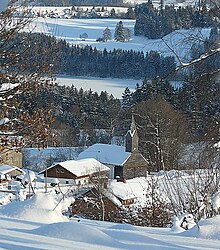 Little church of Linsen with Niedersonthofener See from the north-west

St. Nikolaus and Magdalena is a Roman Catholic chapel from the 14th century in the village of Linsen near Niedersonthofen in Waltenhofen in the Oberallgäu district .

View of the interior with the pulpit, altar and the frescoes in the choir arch

The Gothic church building was built in the 14th century under the Lords of Rottenstein zu Linsen not far from their castle .

In 1439 Rudolf and Heinrich von Montfort donated a benefit to Linsen. In 1597 the church became the patronage of Baron Königsegg-Rothenfels zu Immenstadt.

Over the centuries the interior was redesigned several times, the frescoes were renewed at least twice and most recently during the renovation in 1824, as was the wooden ceiling.

From 1984 to 1987 the chapel was restored with great personal and financial commitment by the inhabitants of the surrounding villages, whereby the historical frescoes were rediscovered. A few years earlier, six statues of saints that were valuable in art history were stolen. Since then, an alarm system has been watching over the art treasures.

An annual mass is held for the patronage (St. Nicholas on December 6th).

The rectangular choir has a Gothic pointed arch window on the south side and a small slit window in a flat, segment-arched floor niche in the east. On the north side the sacristy with wooden ceiling, which was added in the 17th century. Above and then the oratory with access to the pulpit.

The nave with two pointed arched windows on the south side and a pointed arched window on the north side that was probably broken in later. Simple wooden ceilings with profiled cover strips are installed in the nave and choir, a work from the late 17th century. The west gallery over three bevelled joists with board balustrade from the late 17th century.

The western sign (porch) made of wood in the line of the ship's walls is a shingled post construction with stairs to the gallery and tower, above a square shingled roof turret with a small octagonal pointed helmet from the late 19th century.

The Gothic roof structure is also uniformly continuous above the porch, the roof turret above the porch is a boarded wooden construction made of four cross-braced posts from the 16th / 17th century. Century.

The sandstone setting of the portal is Gothic in the side parts. The keystone contains the inscription S / Nikolaus / ora pro / nobis / MDCCLX / XXXVII (Saint Nicholas pray for us / 1797).

At the entrance there is a shell-shaped holy water font made of sandstone with Gothic ornament.

The altar block is made of rubble stones and provided with a sandstone cover plate.

Lecture cross made of lenses, gilded copper sheet, enamel and bronze, 1st quarter of the 14th century (in the Allgäu Museum in the Kornhaus Kempten)

The late Gothic shrine altar from the beginning of the 16th century shows the holy clan . On the left St. Nicholas, on the right St. Wendelin. The oil painting from the end of the 18th century above the altar shows the church patroness Maria Magdalena .

The original side figures are now at the back of the choir, rustic wooden figures from the 17th century, originally Saint Nicholas and Saint Martin, now Saint Ulrich and Conrad.

Additional images: The Stations of the Cross 19th century, the handkerchief of Christ around 1800 and busts of the 12 apostles, 18th century. They were taken over in 1901 from the expired Suiters Chapel.

On the north wall of the ship is a wooden crucifix, a former lecture cross from 1510.

A gilded copper chalice from the late 17th century. A cross particle carved and gilded from the end of the 18th century.

The pulpit from 1680 comes from the parish church of St. Alexander and Georg in Niedersonthofen .

A Gothic lecture cross from the middle of the 14th century comes from the church in Linsen , wood core with gilded copper sheet, studded with engraved diamonds, the associated cast body and blue enameled round meddalions with reliefs. It is currently in the Kempten Local History Museum .

Tower clock made of lenses, before 1659

There was a mechanical tower clock in the tower. It is now in the Tower Clock Museum in Mindelheim . Since it was noticeably changed to the pendulum, which was first invented in 1659, it originally comes from the time before.

The walls of the interior are adorned with three layers of frescoes of Gothic and Baroque styles or periods.

At the choir arch, on the left, St. Paul, in the middle the coat of arms of the Lords of Montfort, on the right, St. George on a white horse with a dragon on the way to a castle.

The window reveals and St. Michael with the bowl of justice are also Gothic on the south side.

Baroque frescoes of St. Nicholas, St. Joseph and Mary Magdalene are on the front left and right of the wall.

Under the epitaph there are Romanesque frescoes (fragmentary the crucifixion of Christ with Mary under the cross, the entombment and "descended to the dead").

The first bell with a swastika-like engraving and the year 1507 has the shoulder inscription + AVE. MARIA . GRACIA. PLENA. DOMINVS. TECVM. According to Thurm, it corresponds to the bell from 1506 in St. Anna in Augsburg and should therefore be assigned to the bell caster Sebald Schönmacher.