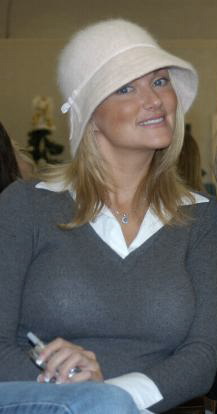 Stacy Valentine in a 2004 talent scout for Penthouse

Valentine grew up in Oklahoma and was a housewife until 1995 . Her then-husband sent nude photos of her to various magazines, as a result of which Valentine was invited to a photo session in Mexico , where there was the possibility of a porn shoot. In February 1996, on Valentine's Day , she shot her first sex scene in front of the camera and therefore bears her stage name . Then she left her husband and flew to Los Angeles . After various photo shoots for established magazines such as Cheri, High Society, Hustler , she got completely into the hardcore business. In 1996 Stacy underwent breast augmentation surgery for the second time since 1994 . In 1997 it was named "Starlet of the Year" by the XRCO . In 1999, Stacey appeared as the star guest of the Closeup-on-Love series at the Oldenburg Film Festival . 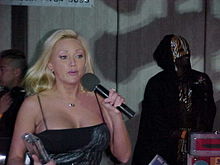 Stacy Valentine with her 1999 FOXE Award