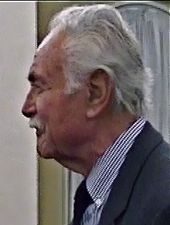 Stanley Ernest Strauzenberg (born November 25, 1914 in London ; † March 6, 2015 in Kreischa ) was a German doctor, university professor and sports medicine specialist who made outstanding contributions to the development of sports medicine in the GDR and internationally.

Having grown up in Dresden , Strauzenberg completed his medical studies in Halle and Leipzig by 1942 after high school and military service . After working as a troop doctor and managing a reserve hospital in Oberbärenburg (Erzgebirge) until May 1945, he worked as a general practitioner for the next 10 years. During this time he looked after the skiers at the Altenberg / Zinnwald performance center . After internist certification and habilitation at the Medical Academy in Dresden , he was appointed professor in 1966. He also received the title of senior medical officer . The main areas of work were diabetology and cardiology in sports medicine . In 1968 he became director of the "Sports Medical Rehabilitation Center of the German University for Physical Culture ", from 1969 of the Central Institute of Sports Medical Service in Kreischa near Dresden. In his professional retirement he was President of the National Committee for Health Education of the GDR from 1981 to 1985.

As a founding member of the working group for sports medicine formed in 1954, later the Society for Sports Medicine of the GDR , he was its president from 1965 to 1973. From 1957 to 1962 he worked part-time as a district sports doctor and head of the main sports medical advice center in Dresden. When internal sports medicine drifted more and more in the direction of doping , which was alien to him, he was transferred and held the chair for sports medicine at the Academy for Medical Training in Berlin-Lichtenberg from 1967 to 1984.

With his successful work in the executive bodies of the World Association for Sports Medicine ( FIMS ) since 1972 (head of the science commission, member of the executive committee), he made a significant contribution to the international reputation of German application-oriented sports medicine in the context of sports science .

In addition to honorary memberships in several national sports medicine societies, Strauzenberg also received that of the FIMS and its rarely awarded gold medal. The German Society for Sports Medicine and Prevention honored him in 1994 with the Golden Decoration.