Graphic: Step separation on the Falcon 9 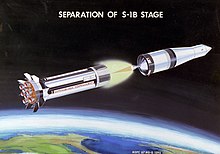 A stage rocket or multi-stage rocket consists of several rocket stages of decreasing size , often mounted one above the other , in which empty fuel tanks and engines that are no longer needed are dropped so that they do not have to be accelerated further along with the payload. In this way, higher speeds and thus higher orbits are achieved than with single-stage rockets. All rockets used to reach earth orbits were and are multi-stage.

The first descriptions and illustrations of multi-stage missiles appeared in the 14th century in the Huo Lung Ching , a Chinese manual on firearms . The Austrian military technician Conrad Haas described a large number of rocket types in his art book (only found in 1961) between 1529 and 1556 , including the multi-stage rocket. The Polish artillery officer Casimir Simienowicz described three-stage rockets in 1650. The Russian teacher and autodidact Konstantin Ziolkowski put the multi-stage principle with his basic rocket equation on a scientific basis. This states that the final speed of a single-stage rocket in weight-free space depends only on the outflow speed of the engine gases and the ratio of take-off mass to final mass (take-off mass - fuel).

Under the designation A9 / A10 , German engineers began developing a multi-stage rocket based on the A4 rocket during the Second World War , but never completed it. The development of large multi-stage missiles was advanced particularly for military use in the United States and the Soviet Union from the late 1940s. Different configurations were examined, of which the stacked rockets and the rockets with boosters are used today.

The simplest rockets consist of only one stage with a motor. In the case of stacked missiles, the stages are arranged one above the other and ignited one after the other. Theoretically, this process could be repeated as often as desired, but with more than four stages the effort for the motors is i. d. Usually greater than the gain in mass. If steps are ignited at the same time but burn for different lengths of time, they are often counted as half steps. If this principle is used at the start, one speaks of boosters . For example, Ariane 5 is a 2.5 stage rocket: it blasts off its boosters before the first stage burns out. The second stage carries a payload, which often has its own engine. Actually, it is a third stage, but it is often not counted in the case of launchers. The drive of the actual payload to reach the planned orbit is also not counted, as this is not part of the launcher.

The technical implementation is demanding and requires precise timing. In particular, the connection between the steps, which has been subject to high mechanical loads, has to be separated mechanically. This is often done pyrotechnically, for example by means of pyro bolts or cutting charges , sometimes also by means of tensioning strap systems or pneumatically . After that, a collision must be avoided. If the stage to be separated still has a residual thrust, small auxiliary engines can be used on the upper stage, which pull them away from the lower stage and thus also bring about a defined position of the propellants in liquid rockets (see Ullage ). Finally, the correct ignition sequence of the upper stage must be run through.

An example of a failed separation is the manned Soyuz MS-10 flight from October 2018. At Soyuz , the remaining oxygen from their tanks is used to separate the first-stage boosters; the gas flows out at the top of the booster and creates a recoil. The oxygen valve on one of the boosters did not open, whereupon it collided with the second stage and damaged its fuel tank. The spaceship with the two crew members was automatically brought to safety using rescue engines.

The Saturn V , the launch rocket of the Apollo moon missions , consisted of three rocket stages. Most of the stage rockets used in space travel nowadays also have three stages, but there are also two or four stage systems. The Indian PSLV even has five levels if you count its booster as an independent level. The last stage is sometimes referred to as the kick stage or kick motor, as it kicks the satellite out of its current orbit into a higher or interplanetary orbit .

Some missiles can be equipped with different upper stages. Then the upper level and the lower level usually each have their own control system (systems of gyroscopes and other sensors ). Other rockets like the Ariane basically only have one control system that sits at the top stage and controls all stages (even with versions with different upper stages such as Ariane 5 GS and Ariane 5 ECA). The upper level is usually separated from its lower level by small explosive charges before it detonates. 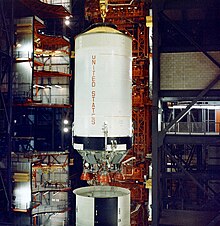 The final speed is made up of the speeds reached individually by each level, if one disregards the negative acceleration caused by the earth's gravity field :

where c 1 is the outflow speed of the gases from the first stage engine (a few km per second), and ln m stands for the logarithm of the respective mass ratio of take-off weight to empty weight . It should be noted that m 1, as empty weight, also has to carry the second and third stage etc., but m 3 only the payload - the satellite (s) .

The curb weight is not only on the missile casing is determined (which must not be too thin for reasons of stability), but also on the Laval nozzle and the fuel - pump and auxiliary units. In the case of inexpensive rockets, the mass ratio is above 5, so that engines with nozzle speeds around c = 3 km / s reach about 5 km / s (3 km / s · ln 5 = 4.8 km / s). In fact, however, gravity significantly reduces the speed of the lower rocket stages (typically by around 1 to 2 km / s with a three-minute burn time, depending on the initial acceleration), which must be taken into account when designing the system.

Such propellant cross feed was initially for the Falcon Heavy from SpaceX planned but has not been realized.