The Sudbrook and its tributary, the Latchmere , are rivers to the north of Kingston upon Thames , Ham and Petersham . You follow the course of a river terrace of the Thames .

The Sudbrook (derived from South Brook ) arises in Dann's Pond in Richmond Park , it flows in a northwest direction to Ham Gate. It flows through a small town called Ham Dip and was dammed there to form Ham Dip Pond and Ham Gate Pond , which were first mapped in 1861 and 1754. The ponds were created as watering places for deer . The Sudbrook drains the western layer of a hill that gives rise to the Beverley Brook in the east and the Hogsmill River in the south . 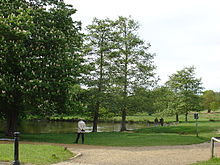 The Latchmere Stream flows into the Sudbrook at Ham Gate Pond, which then flows into Sudbrook Park in Petersham and runs through an underground passage for the rest of its course until it flows into the Thames. It is protected from the influence of the tides in the Thames by a barrier .

Before being buried, the Sudbrook followed the course of the A307 road and was led through a ford at the junction with Sudbrook Lane. The collapse of the underground line in the late 1970s created traffic delays that lasted over a year.

The name Latchmere is derived from lache for lazy or slow and from mere , march or lake.

The Latchmere is created as a ditch in the Canbury area north of Kingston Railway Station and then flows first in a northeast direction and then in a northerly direction. Now running underground, the Latchmere comes to the surface again at Ham Common, about 50 m west of the Ham Gate at Richmond Park and then flows a short distance before flowing under the wall of the park into Sudbrook at Ham Gate Pond.

From the time of the Roman colonization of England to the time of the Anglo-Saxons , the river in Kingston and in the north of the city center together with an arm of the Hogsmill River connected to it and other drainage canals formed a series of islands.

As Kingston grew in the early 19th century, the Latchmere became a sewer. It was seen as a public nuisance and health hazard. The stench of the river was described as bad at all times and, in summer, downright unbearable. This and other open sewers created serious health hazards, and by the 1890s the latchmere was cited as the sole source of drinking water for a human being and a cause of diarrhea and diphtheria . Therefore, the open trenches were closed at the beginning of the 20th century.

The expansion of residential areas on previously agricultural land has displaced the Latchmere underground; however, when it rains heavily, its course reappears and is monitored accordingly because of the risk of flooding.