From June 2010 to August 2011, the memorial of the gray buses erected in Grohmannstrasse commemorated the Sonnenstein euthanasia victims.

The Sonnenstein Euthanasia Center was a killing center of the Nazis in the former fortress Sonnenstein Castle on the Sunstone in Pirna , was set up in 1811 a hospital. The Pirna Sonnenstein memorial commemorates the events there.

In 1940 and 1941, at least 14,751 people were killed by the National Socialists in the fortress. Most of these were mentally ill and handicapped people , but also prisoners from concentration camps . This happened after the beginning of the Second World War under the euphemistic name " euthanasia " as part of the nationwide centrally coordinated and largely secret " Action T4 " of the National Socialists to " destroy life unworthy of life " or kill so-called " ballast existences ".

The Nazi killing facility also served the personnel, organizational and technical preparation for the Holocaust . This extermination facility (one of a total of six) is, not least because of the number of its victims, one of the worst sites of National Socialist crimes in Saxony.

The former castle and fortress was rebuilt in 1811 into an institution for the mentally ill, considered potentially curable, with a good reputation for its reform psychiatric concept. The general practitioner and director of this sanatorium was Ernst Gottlob Pienitz at the time . Between 1855 and 1914 the institution was expanded with numerous new buildings. From 1922 to 1939 the state nursing school was moved to the Sonnenstein.

In 1928 Hermann Paul Nitsche was appointed director of the Sonnenstein sanatorium, which had grown to over 700 patients . When he took office, a new era began: Nitsche, who was distinguished as a reform psychiatrist in the 1920s, relied on the systematic exclusion of the chronically mentally ill and disabled after the turning point in 1933. As a proponent of “racial hygiene” and “euthanasia”, he, who was also a leading psychiatrist in Saxony and also acted as an advisory psychiatrist for the state government, enforced forced sterilization and “catering arrangements” against the “hereditary” patients in “his” sanatorium. In December 1939 the institution was dissolved by a decree of the Saxon Minister of the Interior and set up as a reserve hospital and resettlement camp.

As part of what later became known as " Aktion T4 ", six killing centers were set up in the German Reich in 1940 and 1941 under the direction of NSDAP and a specially created headquarters of the extermination campaign at Tiergartenstrasse 4 , in which more than 70,000 mentally ill and mentally handicapped people from psychiatric institutions, old people's and nursing homes and hospitals were gassed. One of these extermination centers was located in Pirna-Sonnenstein under the direction of the doctor Horst Schumann . The doctors Kurt Borm (code name "Dr. Storm"), Klaus Endruweit (code name "Dr. Bader"), Ewald Wortmann (code name "Dr. Friede") and Curt Schmalenbach (code name "Dr. Palm") were assigned to him. The institution itself carried the internal T4 abbreviation D - which also appears as a business reference on all official letters.

In the spring of 1940, the Berlin “euthanasia” center had a killing facility set up in a screened-off part of the facility: a gas chamber and a crematorium were installed in the basement of a hospital building - house C 16 . The four-house complex was surrounded on the Elbe and park side with a wall that is still largely in place today, and on the other sections with a high board fence to hide the processes inside.

The extermination facility began operations on June 28, 1940. On this day ten patients from the Waldheim sanatorium were gassed. In 1940/41 a total of more than 100 employees worked here as doctors, nurses, drivers, nurses, office workers and police officers. Several times a week, patients were picked up from sanatoriums and nursing homes by buses and taken to the Sonnenstein. After passing the entrance gate of the institution, which was guarded by a police detachment, the victims were taken by the nursing staff on the ground floor of House C 16, separated by men and women, into a reception room. In another room, they were usually presented individually to two doctors from the institution, who determined a fictitious cause of death for the later death certificate. After the "examination", the people had to undress in another room under the supervision of nurses and carers. Then 20 to 30 people were taken to the basement under the pretext that they were going to the bathroom. There they were led into the gas chamber, which was set up as a shower room with several shower heads on the ceiling. Then the personnel involved closed the steel door to the gas chamber. A prison doctor came up, opened the valve on a carbon monoxide bottle and observed the killing process, which took about 20 to 30 minutes, depending on the physique and stamina.

After about another 20 minutes and after the gas had been sucked out, the corpses were pulled out of the gas chamber by “stokers” and burned in two coke ovens that had been supplied by the Berlin company Kori . Previously, patients selected by the doctor were dissected and existing gold teeth were broken out. The ashes of the victims were deposited on the asylum dump or simply poured down the slope of the Elbe behind the house at night.

The “registry office Sonnenstein” sent a death certificate with a falsified cause of death and a standardized “consolation letter” to the bereaved. Women and men of all ages and even children were murdered on the Sonnenstein, including from the "Katharinenhof" in Großhennersdorf in Saxony and from the Chemnitz-Altendorf state institution . The sick who were murdered on the Sonnenstein came from Saxony, Thuringia , Silesia , East Prussia , West Prussia , the Sudeten region and parts of Bavaria . Up until August 24, 1941, when Adolf Hitler issued the so-called “euthanasia stop”, probably for domestic political reasons, a total of 13,720 mentally ill and handicapped people were murdered with poison gas as part of “Aktion T4” in Pirna-Sonnenstein. Saxon intermediate institutions for Sonnenstein were the state institutions Arnsdorf , Großschweidnitz , Waldheim and Zschadraß .

Pre-run of the "final solution"

In the first half of 1942, especially in eastern Poland, as part of Aktion Reinhardt, camps were set up for the extermination of Polish and European Jews, which could fall back on the experience of " Aktion T4 ". About a third of the employees at the Sonnenstein killing center were deployed in the Belzec , Sobibor and Treblinka extermination camps in 1942 and 1943 . These included u. a. Kurt Bolender , Kurt Franz , Heinrich Gley , Lorenz Hackenholt , Gottlieb Hering , Otto Horn , Erwin Lambert , Heinrich Matthes , Gustav Münzberger , Walter Nowak , Josef Oberhauser , Paul Rost and Friedrich Tauscher . 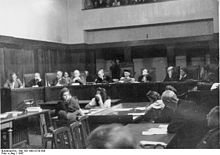 During the summer of 1942, the "euthanasia" facility in Sonnenstein was closed. The gas chamber and the crematorium were dismantled. After carefully covering up the traces of the crimes, the buildings were used as a Wehrmacht hospital from the end of 1942. In the so-called Dresden Doctors Trial in the summer of 1947, some of those involved in the murder were brought to justice. The Dresden jury court sentenced Hermann Paul Nitsche , who had been one of the medical directors of the sick murder campaign in the German Reich since the spring of 1940, and two Sonnenstein orderlies to death.

In Pirna there was hardly any talk about the crimes committed here after the doctor's trial. These have been suppressed and largely concealed for over four decades. A large-scale operation, screened from the public, was built on the site of the Sonnenstein, which also used the parts of the building of the killing center.

These statistics only include the first phase of the murder of Aktion T4 , which was completed on August 24, 1941 by order of Hitler .

During “Aktion T4” under the camouflage name “Sonderbehehandling 14f13” - beginning in summer 1941 - at least 1031 prisoners from the Buchenwald , Sachsenhausen and Auschwitz concentration camps were murdered in Sonnenstein.

The Dresden painter Elfriede Lohse-Wächtler and the writer and dramaturge Hermann von Boetticher are among the best-known victims of the T4 campaign in Sonnenstein . The church lawyer Martin Gauger , who was brought to Sonnenstein from the Buchenwald concentration camp , is one of the victims of Aktion 14f13 .

History of the origin of the memorial

Memorial cross for the 13,720 murdered people in the memorial wall

After the end of the murders in 1941, the " Adolf Hitler School Gau Sachsen ", the Reich Administration School and a Wehrmacht hospital were set up on the Sonnenstein site . After the end of the Second World War, a refugee camp, a quarantine camp for discharged Wehrmacht members, parts of the district office and a police school (until 1954) were housed here until 1949.

From 1954 to 1991, a large part of the site was mainly used for operational purposes by the turbo engine plant to build aircraft turbines. In 1977 the "District Rehabilitation Center Pirna" was set up in the castle area. In 1991 the workshop for handicapped people emerged from this, sponsored by the workers' welfare organization.

Since the autumn of 1989, the history of the place has been the focus of the city public. On September 1, 1989, the Evangelical Community Center in Pirna-Sonnenstein showed a small exhibition by the historian Götz Aly on " Action T4 " on the occasion of the 50th anniversary of the start of the National Socialist murders . This exhibition, which went back on the initiative of some citizens interested in education, received a lot of public attention. As a result, a citizens' initiative was created to create a worthy memorial for the victims of the “euthanasia” crimes on the Sonnenstein. In June 1991 the Board of Trustees Gedenkstätte Sonnenstein e. V.

After archival and building archaeological investigations from 1992 to 1994, the basement rooms of house C 16 have been reconstructed since 1995 and prepared as a memorial (today: building Schlosspark 11). Today's permanent exhibition documenting the crimes is in the attic of the same building. It was commissioned by the Saxon Memorials Foundation to commemorate the victims of political tyranny and was presented to the public on June 9, 2000.

Design of the memorial

Memorial trail for the 14,751 murdered people

A system of signs consisting of 16 signs leads from the Pirna train station via the city center up to the Sonnenstein memorial. The signposts were designed by the Berlin artist Heike Ponwitz and are part of the “past is present” symbol . All panels bear a motif of the Sonnenstein fortress, which comes from the Electoral Saxon court painter Bernardo Bellotto (1722–1780). Each plaque bears a term from the context of the National Socialist “euthanasia” crimes, for example: collective transport , consolation letter , special treatment , bathroom .

Heike Ponwitz's project emerged from a competition to erect a memorial for the 15,000 people.

In addition, a memorial trail of colored crosses connects the town of Pirna with the town of Nazi crimes. Each cross commemorates a sacrifice.

For further references, see the main article: The euthanasia murders during the Nazi era or Aktion T4