Postcard from the time of the scandal: "Teapot Rock - Famous Teapot Dome - Oil District - In Wyoming"

The Teapot Dome scandal was the largest political bribery scandal in the United States of the early 1920s and was a symbol of corruption for a long time after that. In order to secure the lucrative private development of state-owned oil fields, two oil companies bribed Interior Minister Albert B. Fall ( Republican Party ) in 1921/22 . In 1929, Fall became the first American minister to serve prison sentence for a crime committed during his tenure. 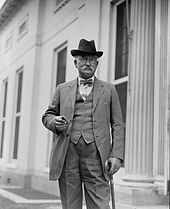 Under Presidents Theodore Roosevelt , William Howard Taft and Woodrow Wilson , the controversial idea was developed that the United States Navy should have its own oil reserves in the form of state-owned oil fields in the event of war. Taft had acquired fields in California (Elk Hills near Taft and Buena Vista Hills) and Wyoming for this purpose . The field located in Wyoming's Natrona County was named Teapot Dome because of a peculiar looking rock formation towering up there .

The Democrats' hope of making political capital out of the affair was not fulfilled. While Warren Harding celebrated the election victory in 1920 with the largest percentage advantage in US history (after the abolition of census suffrage), Coolidge achieved the second largest in the 1924 presidential election with 54% to 28.8% against John W. Davis . This was largely due to the fact that he had a good personal reputation and had removed Daugherty and Denby from office, but also because the critical public learned from the revelations of the entanglement of all parties with big industry; so was z. B. Woodrow Wilson's son-in-law and Treasury Secretary William Gibbs McAdoo has been bribed and failed to get a Democratic presidential nomination. Not only was Navy Minister Denby's career over, although he was not convicted; Theodore Roosevelt's son Theodore Jr. , Deputy Minister of the Navy, was also acquitted, but could no longer take up the desired governor of New York .