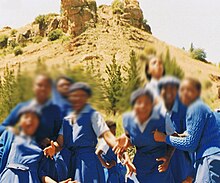 Moshoeshoes I. grave on the plateau

Thaba Bosiu [ ˈtʰɑbɑ boˈsiu ] ( Sesotho ; German: "Mountain by night") is a place in the Maseru district in Lesotho . The neighboring plateau of the same name plays an important role in the history of Lesotho .

The place is about 20 kilometers east of Maseru in the valley of the Phuthiatsana River at about 1680 meters above sea level. The houses are spread west, north and east of the eponymous sandstone - Table Mountain , which overlooks the town about 120 meters. Only footpaths lead to the plateau. The plateau measures around three kilometers in north-south direction and two kilometers from west to east. There are several springs on the plateau, which has been uninhabited for a long time. In the south of the plateau there are sand dunes , which result from the heavy erosion from the times of siege. Not far from the mountain stands the steep sandstone rock Qiloane in an easterly direction , the shape of which is modeled on the tip of the straw hat mokorotlo, which is often worn in Lesotho .

The founding father of the Basotho nation , Moshoeshoe I , had his headquarters in Butha-Buthe in the north of what is now Lesotho from 1820 . In order to better defend his people against the dangers of the Lifaqane , he moved his seat to Thaba Bosiu in 1824. The plateau could only be reached on steep paths. Upstairs there was enough drinking water for many people and space to keep livestock. The name of the plateau was intended to suggest that the mountain grows at night and can therefore hardly be taken. To protect himself, Moshoeshoe invited French missionaries from the reformed Société des missions évangéliques de Paris , who, under the leadership of Eugène Casalis , founded the country's second Christian mission in what is now the town at the foot of the mountain in 1837. The plateau could not be taken by hostile Bantu peoples or the Boers , so that the Basotho nation could never be subjugated by hostile powers. In 1865 the Boer commander Louw Wepener was killed by the Basotho while trying to climb the Rafutho's Pass on the way to the plateau. In 1867 it was the only Basotho fortress that was not stormed by the Boers. Moshoeshoe I signed a treaty on the plateau in 1866 during the Seqiti War that greatly reduced the borders of his country; apparently he wanted to buy time with it. Moshoeshoe I. died in 1870 and was buried on the plateau. After 1870, the new morena e moholo Letsie I. Moshoeshoe moved the seat of government to Matsieng , while Moshoeshoe's third-born son Masopha lived in Thaba Bosiu. From there, Masopha ran resistance against Letsie I and his successor Lerotholi until he was defeated by his nephew Lerotholi in 1898. In the same year the fortifications were razed.

The plateau remained unused from 1898 to 1917 until conservation measures began.

In the 1950s and 1960s, Thaba Bosiu was often used for rallies, especially by opposition parties. On December 27, 1966, King Moshoeshoe II called for a “prayer meeting”, but this was banned by the ruling Basutoland National Party (BNP). While Moshoeshoe did not show up for the meeting, thousands of followers gathered. The soldiers summoned could not disperse the crowd and fired at them. Ten people died in the process. The event became known as the Thaba Bosiu Affair ("Thaba-Bosiu Affair"). In response to pressure from the BNP government, the king had to sign a paper prohibiting him from holding public meetings. He was also only allowed to give speeches that the government had written for him.

In addition to Moshoeshoe I. numerous other leading barena of the Basotho were buried on the plateau, most recently in 1996 Moshoeshoe II. Tens of thousands of people came to his burial in the place.

The church was destroyed in the course of the siege in the Seqiti War in 1865 and was later rebuilt. The new building was also destroyed in a tornado in 1956 and replaced by another new building, in which the roof on both sides of the church area reaches almost to the floor.

Thaba Bosiu was declared a National Monument in 1967. Near the grave sites, which are often only recognizable as piles of stones, are the walls of the houses that were inhabited by Moshoeshoe I and his family. In 2008, the Government requested Lesotho's recording of the plateau in the UNESCO - World Heritage Site .

In September 2016, King Letsie III consecrated . officially the Thaba Bosiu Cultural Village in the west of the place, in which the traditional life of the Basotho is to be represented.

Thaba Bosiu is frequently visited by tourists. In the Ha Rafutho district, part of the Cultural Village, there is a tourism center that serves as the starting point for guided tours up the mountain. The path used here leads over a dyke , the Rafutho's Pass or Khubelu Pass . Agriculture is practiced around Thaba Bosiu, but not on the plateau.

Thaba Bosiu can be reached via an asphalt road. Buses and shared taxis run from Maseru .

In Thaba Bosiu there is the primary school Thaba Bosiu Primary School, which is attended by around 350 students.