Distribution of the Sesotho in southern Africa 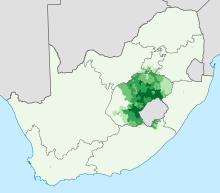 Sesotho (also Southern Sotho or South Sotho ) is a Bantu language that is particularly widespread in the South African provinces of Free State and Gauteng (eight percent of the population over 15, as of 2015) and in Lesotho .

Like North Sotho (Sepedi) and Setswana, it belongs to the subgroup of the Sotho Tswana languages . Sesotho is almost identical to North Sotho and closely related to Setswana. There is also a similarity with the Lozi , which is mainly spoken in Zambia .

Like the other Sotho-Tswana languages, Sesotho comes from East Africa , from where various Bantu peoples moved south from the 16th century. In doing so, they assimilated parts of the San , from which the Basotho took over, among other things, the click sounds . The written language was only introduced by European missionaries in the 19th century . Today there are Sesotho lessons in schools in Lesotho and parts of South Africa, as well as newspapers, magazines and literary works, among others by Thomas Mofolo . The writing of the language was encouraged by the missionaries because it contributed to the spread of Christianity in the church . The Bible was translated into Sesotho early on.

No dialects have developed in Sesotho. The spellings of Sesotho in South Africa and Lesotho differ in some details.

The following letters appear in Sesotho :

In the following, the Lesothic form of Sesotho is considered. The pronunciation is similar to that in German, with a few exceptions. The d is replaced by l in the Lesothic Sesotho . Li and lu are pronounced di and you . The j is pronounced like the Polish dz ( i.e. d followed by g as in Loge ). The s is always sharp. The s can be pronounced aspirated after a t and is then written š . The q also comes in two forms. Both are clicks. The aspirated form is written here as qh . The q or qh can be combined with all five vowels and represents the greatest difficulty in pronunciation for Europeans. The p sound is also available as p and, aspirated, as ph . The same applies to the t .

Finally, special consonant combinations are also hl (pronounced about chl ), tlh (about tl ), kh (like the ch in however , corresponds to the g in Gauteng ), ng (which only occurs at the end of the word) and sh (about sch ). ll , mm and nn are the only double consonants that occur. A letter in mm and nn can be replaced by an apostrophe. In the word 'm'e (mother) the apostrophes stand for two missing m , so that the word has three m in a row. The multiple consonants are pronounced noticeably long.

There are hardly any double vowels. A double vowel always stands for vowels in different syllables (like lekhooa , le-kho-oa). Different vowels appearing one after the other (like above ) are tied like a diphthong , for example wa . The o and u as a single syllable differ in some words, especially in the pitch: the o is pronounced higher (for example: kea u rata , I love you, and kea o rata , I love him / her). All syllables, and therefore all words, end in a vowel. Here is one ng beside a , e , i , o and u to the vowels. At the beginning of a word or inside a word, m and n can also function as vowels, as in mpho , gift, and linku , sheep.

There are seven groups of nouns , six of which have a plural form. This plural form is formed by changing the prefix .

For some personal names , such as ntate , father, and ausi , sister, the plural forms are formed by the prefix bo- . These forms are declined like the first case, i.e. bo-ntate ba ja nama , the fathers eat meat.

In principle, adjectives are formed analogously to nouns. In the forms with li- and without a prefix but the basic form of the adjective is used, for example sefate se seholo , the big tree, likhomo tse Kholo , the big cattle.

The infinitive is formed with ho , analogous to the English to . Ho rata , love, like, is used as an example . The conjugation is the same for all persons (including singular and plural).

Other past tense forms end in etse , itse or tse , for example ke khathetse , I tired, but actually: I am tired.

Another past tense form is formed like this: ke ile ka rata, u ile ka rata , I loved, you loved.

Related verbs with different meanings are a specialty. Example:

The personal pronouns are ke , u , o in the singular and re , le , ba in the plural. These pronouns are only related to people. But there is also a specific form, such as in French and Italian . Then they are ′ na (with a long n), uena , eena , rona , lona and bona .

Many question words end in ng , how mang? who, ning? when, and hobaneng? , Why. One characteristic is the construction of two question words that are connected with kapa , or ,: mang kapa mang , someone, neng kapa neng , sometime.

Most of the words come from the Bantu languages. There are similarities to Swahili , which is spoken in East Africa . Ha ho na mathata in Sesotho means hakuna matata in Swahili , in German: there are no problems . In addition, there are a number of European and Afrikaans loan words in Sesotho such as katse (cat), buka (book), fotobolo (football), sekolo (school), baesekele (bicycle, from bicycle ). , Efforts are to transfer modern technical terms from English into Sesotho, for example junifesithi for university or university . Often these expressions, like numerals , are woven into normal English conversation. Words and place names with click sounds are influenced by the San languages.

All people are born free and equal in dignity and rights. They are endowed with reason and conscience and should meet one another in a spirit of brotherhood.