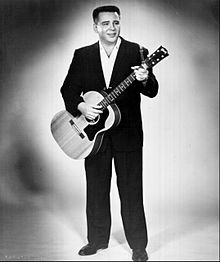 Richardson was born in Sabine Pass, Texas, the first of three sons to Jiles Perry Sr. and Elise (Stalsby) Richardson. His two brothers were named Cecil and James. Soon after his birth, the family moved to Beaumont, Texas , where he attended Beaumont High School in 1947 and became a member of the Royal Purple football team.

Richardson later studied law at Lamar College and joined a band and the local choir. During this time he worked part-time for the radio station KTRM . On April 18, 1952, he married Adrianne Joy Fryou, and in December 1953 daughter Debra Joy was born. In 1955, Richardson joined the United States Army , where he served two years at Fort Bliss. After his release, he returned to work at KTRM and moderated the program Dishwashers' Serenade from Monday to Friday from 11:00 to 12:30 .

One of KTRM's sponsors wanted Richardson to switch to a different time. After watching some college students do a dance called The Bop , Richardson called himself The Big Bopper . He got a new show and soon after became program director.

In May 1957, Richardson broke the record for permanent moderation by eight minutes. He moderated for five days, two hours and eight minutes at a time. During this time he played songs in 1821 and showered during the five-minute news breaks.

Richardson is also credited with the first music video from 1958.

It was around this time that Richardson began writing songs. George Jones later recorded his track White Lightning , which became number one on the country charts . Richardson wrote Running Bear for his friend Johnny Preston , starring as a background singer. However, the title was not published until September 1959 - after his death - but then rose to number 1 in the charts.

It was Harold "Pappy" Dailey who started Richardson's singing career. Dailey worked at Mercury Records and helped Richardson get a contract. However, Richardson's first single Beggar To A King did not hit the charts. His second attempt, Chantilly Lace , was released as the B-side in the summer of 1958 and rose to number 6 on the pop charts. In total, the title stayed in the top 40 for 22 weeks.

With the success of Chantilly Lace , Richardson took a break from KTRM and joined Buddy Holly , who was on the Winter Dance Party Tour with Ritchie Valens , Dion and the Belmonts and Frankie Sardon . On February 2, 1959, after performing at the Surf Ballroom in Clear Lake, Iowa , Buddy Holly chartered a Beechcraft Bonanza to fly ahead to Moorehead, near Fargo , North Dakota , for the next gig , while the rest of the tour members took the bus should follow. Because there were problems with the heating on the tour bus and Richardson was already showing the first signs of the flu and therefore did not want to drive, Waylon Jennings , one of Holly's new band members, gave him his place on the plane. 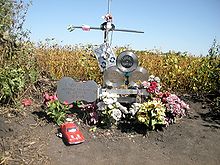 Memorial at the crash site at Clear Lake

In the early morning of February 3rd, just before 1:00 a.m., the four-seater Beechcraft Bonanza took off during a snowstorm approaching and fell into a cornfield just a few minutes later, barely five miles beyond Clear Lake. Holly, Valens and pilot Roger Peterson were also killed with J. P. Richardson. It is believed that Peterson flew straight into the blizzard, lost orientation, and therefore accidentally flew down instead of up. Using the instruments, it was later reconstructed that the machine must have crashed into the field at about 170 miles per hour, overturned and thrown three of the occupants out. Only Peterson was trapped in the wreck. Due to the bad weather, the accident site could only be reached ten hours later and the bodies recovered.

Richardson left behind his wife, Adrianne Joy, a four-year-old daughter, Debra Joy, and an unborn son, Jay Perry, who was born two months after Richardson's death. Richardson had set up a recording studio in his Beaumont home and planned to get involved in a radio station. In addition, there were already 20 songs that he wanted to record both solo and with other artists.

In 2007, at the request of his son, JP Richardson was exhumed and an autopsy of his body, which was surprisingly well preserved, was performed. It was found that he had suffered severe fractures from head to toe, which suggested that he must have died immediately when the machine hit. This also refuted rumors that he had survived a short time and still tried to get help because his body was about 15 meters (40 feet) from the crash site in an adjacent field, while Holly and Valens were found right next to the plane wreck .

Richardson was inducted into the Rockabilly Hall of Fame for his services to rockabilly music .

As early as 1959, the rockabilly singer Ray Campi recorded the song The Man I Met (A Tribute To The Big Bopper) in memory of Richardson for his record label D Records .

1971 singer and songwriter Don McLean memorialized this misfortune in his song American Pie , when he named that February 3rd, 1959 with the text line "the day the music died" the day "on which the music died".