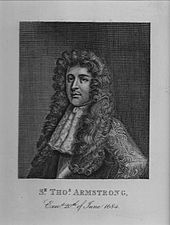 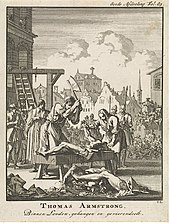 Execution of Thomas Armstrong in 1684 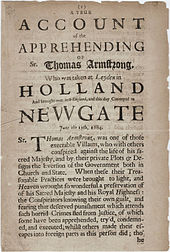 A True Account of the Apprehending of Sir Thomas Armstrong , printed in London, 1684

He came from the noble family Armstrong . He was a son of Colonel Sir Thomas Armstrong († November 1662) from his marriage to Anna Anderson. His father fought in the Thirty Years' War in the Netherlands and as a royalist in the English Civil War and was imprisoned twice in the Tower of London by Oliver Cromwell during the Commonwealth .

He himself was an officer in the English Army and rose to the rank of Lieutenant Colonel . During the Irish Confederation Wars he served in Ireland and was beaten there in late 1643 by the Earl of Ormonde to Knight Bachelor ("Sir").

During the interregnum , Armstrong was a supporter of Charles II , involved in the plot to capture Chester Castle in 1655, and exiled the treasure of Aubrey de Vere, 20th Earl of Oxford, to Charles. He may have been incarcerated for a year after his return. In 1657 he married Catherine, daughter of James Pollexfen and niece of Edward Hyde, 1st Earl of Clarendon .

After the restoration , he was Member of Parliament for Leicester in 1660 and received a commission accompanied by the Horse Guards in February 1661 . In August 1675, Armstrong killed one of the sons of a lady-in-waiting in a London theater. Armstrong was pardoned on the basis that his adversary had pulled first.

Monmouth's influence secured him Member of Parliament status for Stafford in March 1679 for the First Exclusion Parliament . After the Rye House Conspiracy in 1683, he was charged with high treason . He fled from Kleve to Rotterdam , but was caught in Leiden and sentenced to death by hanging, disembowelling and quartering by Judge George Jeffreys and executed on June 20, 1684. His head was impaled on Westminster Hall , three of his body parts were on display in London and a fourth in Stafford. He was later under Wilhelm III. rehabilitated in full honor.

He left three daughters from his marriage to Catherine Pollexfen.