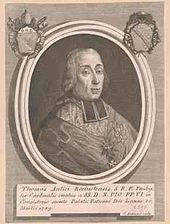 Antici was initially a papal diplomat. Pope Pius VI created him in the consistory of March 30, 1789 cardinal and appointed him cardinal priest with the titular church Santa Maria in Trastevere . From 1795 to 1798 he was Prefect of the Council Congregation .

On March 7, 1798 he resigned from his cardinalate because, if the official version is to be believed, he was chronically ill and wanted to treat himself to retirement. The Pope accepted his request in September of the same year. Antici therefore no longer took part in the conclave of 1799/1800 , which Cardinal Chiaramonti chose as Pope Pius VII .

Aside from the official version of Antici's resignation, there are speculations that the real reason for his request for permission was difficulties with the Roman Republic. Antici later asked for reinstatement in the cardinal office, but tried in vain to be admitted as a participant in the conclave of 1799/1800 in Venice . In a letter to the College of Cardinals, Antici writes that the revolutionaries forced him to give up his office. The cardinals only confirmed the decision of the now deceased Pope. On September 3, 1800, Antici turned to the new Pope Pius VII to regain his cardinal dignity, but this was again refused.

Antici retired to Recanati, where he mainly looked after the poor until his death.