The Union Sportive de Boulogne Côte d'Opale is a French football club from Boulogne-sur-Mer , a coastal town in the French department of Pas-de-Calais , on the Strait of Dover .

The close proximity to England, the motherland of football, meant that the club was founded as US Boulonnaise in 1898 and is one of the oldest clubs in France . 1904–1906, 1909 and 1922 he was champion of the coastal region, in 1926 winner of the honor division of Northern France. In 1936 it was renamed US de Boulogne (sometimes also US du Grand Boulogne ) and in 1997 the club took on its current name. The USBCO has been promoted three times since 2005 and qualified for the top professional league for the first time in 2009. The club colors are black and red; the league team plays in the Stade de la Liberation , which after the most recent renovation in 2009 now has a capacity of 15,004 seats.

The club's president is Jacques Wattez; After the club's relegation to the third division , Georges Tournay took over as coach for the 2012/13 season.

Boulogne had professional status from 1935 to 1939 and again since 1959. First class ( Division 1 , renamed Ligue 1 since 2002 ), the club only played in 1939/40 [unofficial war championship] and again from 2009 after the league organization has confirmed the promotion. After only a year, the club got down again. 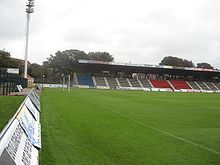