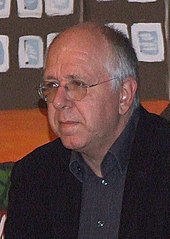 Volker Ladenthin (born June 11, 1953 in Münster ) is a German educational scientist . From 1995 to 2019 he taught as a university professor for historical and systematic education at the University of Bonn .

From 1973 , Volker Ladenthin studied German , history and philosophy in Münster and Berlin . From 1981 to 1986 he was a teacher for German, history and philosophy at the Laurentianum High School in Warendorf and at the Overberg College in Münster. In 1986 he became a research assistant in the educational science department at the Westphalian Wilhelms University of Münster. After graduating as Dr. phil. 1990 followed in 1994 the habilitation for general pedagogy .

After visiting professorships in Cairo and Helwan (Egypt), Volker Ladenthin was appointed to the C4 professorship for historical and systematic education at the University of Bonn in 1995 .

Ladenthin headed the Rheinische Kinderbuch-Gesellschaft as president until 2009 and was chairman of the pedagogy section of the Görres society from 2003 to 2011 . He is a member of the scientific advisory board of the Cairo German Studies , Cairo (since 1996), since 1997 co-editor of the quarterly journal for scientific pedagogy , Bochum, from 1997 to 2012 he was co-editor of the journal engagement , Bonn, and since 2002 co-editor of the book series Systematic Pedagogy . From 1999 to 2004 he was also the editor of the Erich Kästner Society's yearbook . From 2003 to 2019 he was editor of the magazine schulleitung intern .

Volker Ladenthin is counted among the educationalists of the "transcendental-critical pedagogy", which he has shaped into a "language-critical pedagogy". For this reason, Ladenthin understands pedagogy not only as a social relationship, but as a necessary action that is given up when people are able to speak. Language is understood as a fundamental determination of human being - it cannot even be questioned, because this has to be done in language. In the face of language, all other human actions must be planned. In this understanding, literature is the appearance ("fiction") of a language that has come to terms with itself (with an idyllic, elegiac or satirical intention).

Between 2016 and 2019, Ladenthin published his trilogy on responsible behavior in modern societies: Can we know anything for sure - and what are the limits of our knowledge? ( What we can know and what we have to believe , 2019) How can we justify (social) action? ( Take care - do it better! 2018) How do we deal with the fact that our knowledge is limited - and yet we have to take absolute responsibility for the lives of others? ( Doubt, not despair, 2016)

Criticism of the education system, PISA and the competence orientation

Ladenthin sees advantages of homeschooling over state-organized education. He rejects the competence orientation of the curricula and the orientation towards the standards of the PISA study . These have come about undemocratically, are immunized against criticism in an ideological way, do not correspond to the constitutional goals of the school system and lead to a loss of education, culture and values ​​through adjustment to formal, economically justified standards. The catchphrase “ educational justice” only serves to “gain acceptance”. The competence theory is the most pronounced form of a theory of external control so far .