The Wade Commercial Car Company was a short-lived American manufacturer of commercial vehicles in high-wheel design .

The company, based in Holly (Michigan) , built a very simple transporter in express design , even for high-wheelers , as platform trucks were called at the time. The brand name was Wade .

The vehicle had a payload of 800 lb (365 kg). Although highwheelers could usually be easily converted for passenger transport, the calf is only mentioned in the commercial vehicle literature. Accordingly, he had an air-cooled single-cylinder engine with unknown power under the car floor. The power was transmitted to the left and right rear wheel via a friction gear and a drive chain . The wheelbase was only 72 inches (1829 mm).

The vehicle cost only US $ 400 and stayed in production for about a year. Nothing is known about the number of items produced, nor about the causes of the production stop. However, this fell at a time when highwheelers were being replaced by more modern types of vehicles. 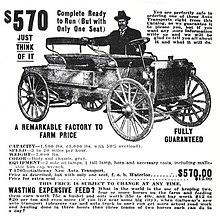 Advert for the Galloway T-1705 (Galloway's Auto Transport) manufactured by the Dart Manufacturing Company for the William Galloway Company (circa 1908).

Many highwheelers were used to transport both people and goods.