Wensleydale with the typical blue-gray face

Wool of a white Wensleydale

Wool of a black Wensleydale 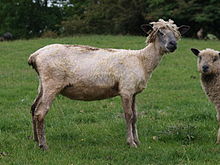 Wensleydale , also called Wensleydale Longwool , is one of a total of ten British longwool sheep breeds and is considered to be very robust and frugal. The origin of this breed in the region of Wensleydale in North Yorkshire , England. The name Wensleydale for this breed was first used in 1876 when the animals on display had to be assigned to a specific breed at a performance show in Yorkshire. The most striking feature of this breed of sheep are the long strands of wool twisted like a corkscrew. Because this breed of sheep shows both a good meat and wool production, it is counted among the so-called dual -purpose breeds .

The UK regions where it is traditionally held include Yorkshire and North Yorkshire, Westmorland , Cumberland , Lancashire and Scotland . Overall, however, the Wensleydale is now one of the rarer British domestic animal breeds and is classified as endangered by the Rare Breeds Survival Trust , as fewer than 1500 ewes are listed in the herdbook . In spite of their comparatively rarity, bucks of this breed are used for crossbreeding: The lambs that result from the crossings are very vigorous and can therefore be brought onto the market comparatively quickly.

Wensleydales are large-framed sheep. The bucks reach a height of 90 centimeters at the withers and weigh an average of 136 kilograms. Ewes are smaller with a height at the withers of 80 centimeters and weigh an average of 90 kilograms. The parts of the slightly ram-shaped head that remain unwoled are blue-gray, otherwise the body is light. Only in a few animals are the legs also blue-gray.

After one year of growth, the wool has a staple length of 20 to 30 centimeters. The fleece weighs an average of 5 kilograms, and for one-year-old sheep even up to 9 kilograms.

The Wensleydale is one of the few sheep breeds whose breeding history is very well documented.

The origin of the Wensleydale are the Teeswater sheep kept in the Yorkshire Dales , especially in Wensleydale and Teesdale , of which the Scottish agronomist David Low wrote in 1839 that it was one of the most remarkable British domestic sheep. With their coarse heads and long limbs, they were considered a not very handsome breed of sheep. Philip Walling believes that Teeswater sheep were among the largest and heaviest in Britain during the 18th century. The weight of a particularly heavy specimen slaughtered in Stockton-on-Tees at Christmas 1779 was 40 stones , around 250 kilograms, making it about as much as a Shetland pony .

Teeswaters, however, were not kept for their meat, but for their valuable wool. They were demanding in their posture. Unlike most sheep breeds, they required excellent grazing conditions and had to be fed with hay and grain in the winter. The sheep were not fully grown until they were three or four years old.

At the same time as the beginning of the Industrial Revolution , however, the demand for meat increased in Great Britain while that for wool declined. In order to satisfy this meat demand, sheep breeds began to be crossed, which grew up faster and which had a much better meat performance than the traditional tea waters. The so-called Dishley Leicester , those Leicester sheep that had been further developed in breeding by the farmer Robert Bakewell in the 18th century, were used for this. A Richard Outhwaite rented 1838 for 40 guineas from the Farmer Sonley from Helmsley to mate by this Bock his ewes' best Leicester Ram, who was ever bred. " This buck was not only noticeable because of his very large body, but also had a striking blue-gray head. One of the male lambs that emerged from this crossbreeding and that was born in the spring of 1839 not only inherited the unusual height of its father and the blue-black head, but also had a fine, white wool. His weight, which was determined at a breed show in 1841, was 203 kilograms. Its owner gave it the name "Bluecap" and all today's Wensleydales descend from this ram. According to Philip Walling, there is no other breed of sheep that can be so clearly traced back to a single sire.

The owner of "Bluecap" refused to sell his breeding ram, even though he was offered up to 100 guineas for him at a time when a small farm could be bought for 300 guineas. However, he was ready to lend the buck, described euphemistically as very active, to other breeders in Yorkshire, who let him cover their teeswater herds. The buck turned out to be a very good sire, whose offspring showed many of his good qualities. By mating his offspring with each other, a breed was created that combined the size, liveliness and lean meat of the tea sweater with the early physical maturity and better physique of the Leicester sheep.

In 1890 two breeding associations were founded out of rivalry and conflicting interests, namely the "Wensleydale Blue-faced Sheep Breeders' Association" and the "Wensleydale Longwool Association", each of which kept its own herdbook for this breed . The point of contention between the two breeding associations was which breeding rams were allowed to be entered in the herdbook. The older established Wensleydale breeders had breeding rams whose lineage could be traced back more than twenty years and insisted that they be recognized as purebred and therefore worthy of herdbook entry. Only since 1920 have these two breeding associations been united under the name "Wensleydale Longwool Sheep Breeders Association". In the opinion of Philip Walling, the decades-long dispute between the breed societies also influenced the acceptance of the breed in other regions and led, for example, to breeds such as the Border Leicester, which was further developed in breeding during the same period, establishing themselves as a breed in a larger area.

While the occasional black Wensleydales used to be excluded from breeding, there has also been a herd book for these since 1994. Black Wensleydales, however, are clearly in the minority.