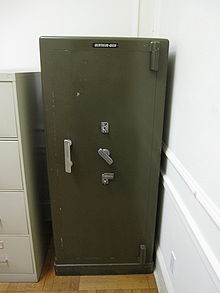 The Wertheim GmbH is a company that Safes manufactures. It was founded by Franz Freiherr von Wertheim in 1852. The head office is located in Guntramsdorf in Lower Austria, south of Vienna. One Wertheim plant is located in Uttendorf im Pinzgau, and two more in Slovakia in Dunajská Streda and Modra .

Franz von Wertheim, born in 1814, completed a purely commercial apprenticeship, but subsequently acquired extensive technical knowledge through self-study and traveling. After trading in foreign tools, he decided in 1841 to set up a tool forge himself, the products of which were highly regarded. In 1845 he was Emperor Ferdinand I to Hofwerkzeug-makers appointed. After 600 guilders had been stolen from Wertheim during a break-in in 1848, during which an iron cash register was broken, he came up with the idea of ​​making burglar-proof cash registers himself. On September 1, 1852, he founded the "First Austrian Cash Factory".

In the years that followed, the company experienced an unprecedented rise, not least due to the fire safety of the safes produced. Wertheim knew how to advertise the quality of its products with high-profile marketing events. Several public "fire trials" took place in which Wertheim safes were placed on large pyre outdoors and exposed to fire. Several hours later, after the fire went out, the contents could be removed intact and examined by the astonished crowd. In 1857 he was able to hold such a trial by fire in Constantinople, even in the presence of the sultan .

After Franz von Wertheim's death, his illegitimate son Franz took over the management in 1883 and was again granted court privilege. The company began to manufacture elevators and lifts in addition to safes . The safes have been further improved.

During the First World War , Wertheim produced for the army. The collapse of the monarchy in 1918 and the following years hit Wertheim hard, the branches in Budapest and Prague had to close. Other products such as steel furniture and shelves for libraries that were fireproof helped the company absorb the loss. The renewed economic crisis in the 1920s brought the company almost to the brink of ruin. Franz Wertheim had to save the company with his private fortune.

He died in 1925, his brother-in-law Ernst Bruno took over the business. During the Second World War , Wertheim had to produce again for the armaments industry. After the Second World War, the company was able to be rebuilt with the help of Creditanstalt . The old headquarters on Mommsengasse in Wieden was given up and the factory moved to Wienerberg.

Wertheim has also been manufacturing escalators since 1951 . In 1969 the Swiss company Schindler bought large shares and subsequently became the main shareholder. In 1985, Schindler decided to outsource cash register production, which prompted the Wertheim management to acquire this area as part of a management buy-out and to continue it as an independent company. After the fall of the Iron Curtain , Wertheim took the opportunity to set up production plants in Slovakia and to open up the countries of Eastern Central Europe as a sales market , as was the case during the Danube Monarchy. Wertheim in Dunajská Streda has been manufacturing elevator cars for Schindler to order since 2001.

By 2015, the center of Wertheim in the 10th was the Viennese district of favorites at the Wienerbergstraße 21-25.