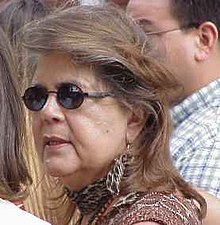 She was born in Tahlequah, Oklahoma, the sixth of eleven children. Her father was Cherokee and her mother was a woman of Dutch and Irish descent who had followed the Cherokee way of life. In 1942 the United States Army expropriated the land of 45 Cherokee families in order to expand a military training area, Camp Gruber. The family moved to California as part of a relocation program run by the Bureau of Indian Affairs .

There, Wilma Mankiller attended Skyline College in San Bruno and San Francisco State University and married at the age of 17. During her time in California, she was involved in the Indian Center of San Francisco , joined the political activist movement in the late 1960s, and took part in the 1969 occupation of Alcatraz Island, San Francisco Bay. She volunteered for the Achumawi tribe for five years . After their divorce in 1977, she went back to Oklahoma with her two daughters, hoping to help her people there. She began working for the Cherokee Nation, earned a bachelor's degree in social science from Flaming Rainbow University in Stilwell, Oklahoma, and then went to work at the University of Arkansas .

In 1983, Wilma Mankiller was elected deputy to Ross Swimmer, who served as Cherokee Nation chief for his third consecutive term. In 1985, Swimmer resigned after being appointed head of the US Bureau of Indian Affairs . Mankiller succeeded him, making it the first female Cherokee chief. At the next chief election in 1987 she was confirmed in office. In 1991 she won the chief election with a landslide victory. In 1995 she decided not to take up the post of chief again, mainly because of health problems.

During her time as chief, Wilma Mankiller encountered numerous obstacles. By the time she became chief, the leadership of the Cherokee Nation was male-dominated. This structure was in contrast to the traditional culture and value system of the Cherokee, who tended to give leadership positions to both sexes, albeit with slightly different competencies.

During her three terms in office, Wilma Mankiller enlivened the Cherokee Nation through community-building projects in which men and women worked together for the common good. The projects were financed through “self-help” programs of the Bureau of Indian Affairs. The initiative came from the Cherokee tribe of the United Keetoowah. Financial aid came from the US federal government fund for indigenous self-determination. Projects included establishing tribal businesses (such as horticultural companies and government armaments factories), improving infrastructure (such as providing the Bell community in Adair County, Oklahoma) with running water, and building a hydroelectric power station.

As part of the indigenous self-determination policy pursued by the US federal government, Wilma Mankiller advanced the negotiations between the federal government and the tribes. She helped prepare the government-to-government relationship that the Cherokee Nation has with the US government today.

Government actions included the establishment of a community development agency for the Cherokee Nation and the reopening of Sequoyah High School in Tahlequah. The Cherokee Nation's population grew from 55,000 to 156,000 during her reign. "Before I was elected," she said, "little Cherokee girls would never have thought that when they grew up they could be chiefs."

After the end of her tenure as chief, she took over a teaching position at Dartmouth College , which had given her an honorary academic degree in 1991.

In March 2010, it was reported that she had cancer of the pancreas . She died on April 6, 2010 at her home in Adair County, Oklahoma, leaving behind her husband and two daughters. About 1200 people attended the funeral service held on April 10 at the Cherokee National Cultural Grounds in Tahlequah. On the occasion of her death, President Barack Obama made a statement in which he paid tribute to Wilma Mankiller's life's work.