Economy of the Dominican Republic 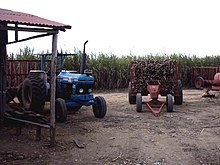 Cocoa is also an important export good for the Dominican Republic

Agriculture represented the most important part of the Dominican economy for a long time and was almost exclusively oriented towards export. In addition to cocoa , coffee and bananas , sugar cane was mainly grown. Traditionally, sugar export represented an indispensable part of the country's export value. Sugar cane cultivation, like the entire agricultural sector, was characterized by a rather low rate of productivity. During the 1960s, for example, around 60% of the working population was employed in this sector, but only contributed just under a quarter of GDP. In the same decade, the economic structure of the country began to change drastically in the wake of economic changes on the world market . Unfavorable terms of trade gradually reduced the importance of agriculture in favor of mining and, from the late 1980s, tourism . In the mid-1970s, sugar was still making up almost half of the country's export value, but this proportion fell to 21% by 1985.

One of the main reasons was the erosion of world market prices for sugar, which plummeted in the first half of the 1980s. In 1982, for example, Caribbean sugar was only a quarter of the price it had in 1980. In 1985, that value was less than a fifth. In particular, the sharp reduction in the US import quota for Dominican sugar in 1998 meant that the share of sugar in total export output fell from around 21% in 1997 to 4% in 1999 in just two years. The fact that more than a third of the workforce was still working in agriculture in 1994 shows that productivity remains low. In addition, the sugar industry is largely dominated by multinational corporations and the state. The withdrawal of foreign investors due to the steadily declining profitability resulted in heavy additional social costs for the Dominican Republic.

In some cases, attempts are being made to switch to other products with success, but the focus is still on export. The Dominican Republic is now the third largest exporter of avocados (after Israel and South Africa).

Furthermore, the uneven distribution of agricultural land should be named. 1% of farms own over 50% of the usable land, while 75% of small farms only have a share of 15%. The domestic demand for agricultural products is inadequately met by medium-sized farms. Since, despite some attempts at land reform in favor of smallholders, 85% of all farms are still smaller than 5  hectares , subsistence production in line with demand for national consumption is not possible. The necessary food imports thus contribute to the chronic deficit in the trade balance.

The mining industry was completely insignificant for a long time, but recorded exorbitant growth from the 1970s. During this decade, the share of this branch of industry in exports rose from <0.5% in 1970 to 38% in 1980. In addition to the mining of iron nickel, gold , silver and bauxite were of greater importance. However, only 1% of the workforce was employed in this segment, which speaks for high productivity. On the other hand, this shows that this sector hardly created any jobs in order to take on larger parts of the workforce and to share the relatively good income opportunities.

In addition, large foreign corporations also dominated the business in this area, which had a fatal effect in the mid-1980s. Like the Gulf and Western Company in the sugar business in 1984, the Aluminum Company of America (Alcoa) sold all of its factories in the bauxite sector as early as 1982 due to international price drops and the general economic recession. Only iron nickel made up a significant share of around 30% of the total export volume until the mid-1990s. But even there, large price drops and low demand meant that at the end of October 1998 all production was stopped for three months. In 1999 the export volume was therefore just under 5%.

The so-called “free production zones” (“zona franca”), which de facto import semi-finished products outside of the national economy, process them into finished products and export them again, have proven to be of enormous importance for the Dominican Republic. The importance of the “free production zones” for the Dominican economy can only be proven indirectly for the following reason: only the wages and salaries of those employed there are included in the calculation of GDP , but not the profits of the companies operating there. In 1998 they numbered around 500, and they provided work for around 190,000 people. Furthermore, the "Free Production Zones" claimed approx. 37% of all imports in the country and in 1998 accounted for over 82% of exports. One of the reasons why this share has increased so much is the drop in raw material prices of the former main export products sugar, bauxite, etc. mentioned in the previous section.

Despite this rapidly growing part of the Dominican economy, the beginning of stagnation was already apparent in 1998. The Dominican Republic took the initiative in this regard and, together with other Central American states, tried to put pressure on the US government with the aim of achieving parity with the Mexican textile industry.

As can be seen from the employment figures already mentioned, the majority of the workforce is employed in this sector. Their share in this sector is estimated at 40–45% in 1994. It must be noted, however, that this sector also includes small businesses, shoe shine, street vendors, etc. This form of work also serves as a kind of catchment basin for the unemployed and represents the only chance of survival for many urban families of the lowest social class.

Despite all the adversities in the other economic sectors, the average growth in GDP was 7% in the second half of the 1990s. The growth rates in the construction industry (1996–99: Ø +17.1%), communication (1996–99: Ø +17.93%) and hotels & restaurants (1996–99: Ø +11.23%) are particularly striking ). This development is mainly due to tourism, which has expanded massively since the late 1980s. This area became the main source of foreign exchange in the country within a relatively short period of time.

A disadvantage here that should not be neglected is the structural dependence on foreign economic conditions. Almost all tourists in the country are from western industrial nations; they fail to appear if the economic situation in their home countries worsens. In particular after the attacks of September 11, 2001 and the onset of the international economic downturn, the tourism business initially slumped slightly. The number of tourists in 2002 fell by as much as 146,000 or approx. 5% compared to 2001. These were mainly missing tourists from the USA.

In the first half of 2006, the average length of stay of tourists was 9.5 days. H. there are relatively many short vacationers from the USA and Canada (52%). Europeans (39% of tourists) usually stay at least two weeks. Incidentally, the Dominican Republic has not been a cheap destination for a long time: a tourist currently (as of the 1st half of 2006) spends around US $ 107 per day. The price level for goods in supermarkets is almost on a European level.

The employment structure and social situation

The country's economic structure has changed significantly over the past 40 years and has also had an impact on the population. Today, although there are still many employed people working in the agricultural sector, its importance in favor of tourism, also in terms of the quantity of jobs, has declined considerably. Increasingly, a large number of jobs are directly or indirectly dependent on tourism. In the course of this development, a middle class emerged that was not to be found at all at the beginning of the 1960s and is becoming increasingly important.

However, this fact cannot hide the social reality of the country. This can be seen particularly well in the income distribution. In 1998 the richest fifth of the population had more than 53% of all incomes, while the poorest fifth had just under 5% of all incomes. This inequality in the distribution of income becomes even clearer if one considers the proportion of the richest tenth, which makes up 37.9%. The impressive increase in GDP per capita from around US $ 1,040 (1990) to US $ 2,110 (1999) did not mean that lower income groups could benefit from it. Since the early 1990s, the concentration of income in the top 30% of the population has increased slightly but steadily. As a result, the income situation for the poorer and poorest classes deteriorated. Many people earn their money in the "informal sector" - for many, especially for the unqualified, there is no formalization of employment relationships (i.e. short-term employment contracts that are only verbally expressed, no health and safety laws, no continued wages, no social security), and besides (typical for work in the informal sector) the work of the low-wage Dominicans is very unproductive.

Why the political system did not begin to destabilize due to this situation of the population, is u. a. attributed to two factors: On the one hand, the half a million illegal immigrants from Haiti serve as stylized scapegoats and have been victims of violence, discrimination and exploitation up to the present day. The basis for this is the time of the Haitian occupation of the country from 1822 to 1844 and the hatred and racism that arose from it, which is characteristic of the Dominican Republic. This fact has always been a popular propaganda element in politics. On the other hand, the mostly illegal labor migration, especially to the USA, relieves the state labor market and, with some restrictions, serves to improve the living conditions of the people concerned and - via cash transfers - also the family members who have stayed behind. According to a 2004 study by the Inter-American Development Bank, annual remittances from Dominicans living in the United States were around $ 1.6 billion.

Economically speaking, the Dominican Republic is not competitive in international comparison. The agreements of the CAFTA free trade zone with gradually decreasing tariffs for the exchange of goods with the USA until 2010 will therefore lead to more imports from the USA, but not to significantly more exports. As the tariffs on imports from the EU do not decrease, it is becoming increasingly difficult for European companies to export goods cheaply to the Dominican Republic.

The exchange rate of the Dominican Peso (DOP) to the US Dollar (USD) often does not follow economically reasonable considerations, but appears to be arbitrary. This results in planning uncertainty for both private individuals and companies. The price fluctuations were particularly serious during the time of President Hipólito Mejía (2000-2004), when the price rose from about 1:16 to almost 1:60 in a short time, during the Pan American Games in Santo Domingo (2003) or on other occasions but again fell sharply to about 1:25. Since Leonel Fernández was re-elected, the peso has been much more stable.

Economies of Modern States and Other Areas in North America