XSLT , short XSLT is a programming language for the transformation of XML -documents. It is part of the Extensible Stylesheet Language (XSL) and is a Turing-complete language.

XSLT was published as a recommendation by the World Wide Web Consortium (W3C) on October 8, 1999. XSLT is based on the logical tree structure of an XML document and is used to define conversion rules. XSLT programs, so-called XSLT stylesheets , are themselves structured according to the rules of the XML standard.

The stylesheets are read in by special software, the XSLT processors , which use these instructions to convert one or more XML documents into the desired output format. XSLT processors are also integrated in many modern web browsers , such as Opera (version 9 or higher ), Firefox and Internet Explorer version 5 (version 6 or higher with full XSLT 1.0 support).

XSLT is a subset of XSL , along with XSL-FO and XPath .

Originally, a DSSSL- like language in XML syntax was to be created with XSL . It quickly became clear, however, that such a language actually consists of three interacting, but independently usable parts:

The declarative , functional- applicative language XSLT is a. emerged from DSSSL . XSLT was originally developed by James Clark (XSLT 1.0, XSLT 1.1), Michael Kay is responsible for the current further development . Since January 23, 2007, XSLT 2.0 has been a "Recommendation" of the W3C and has replaced the version XSLT 1.0, which has been valid since 1999. In the meantime, there is also a version XSLT 3.0 as a candidate recommendation from November 2015 by the W3C, which is already supported by the Saxon parser. 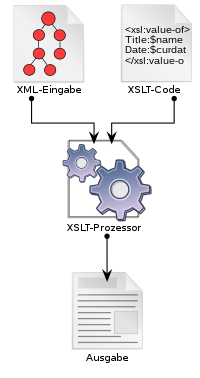 Simplified representation of the functionality of XSLT - An XML document is converted into a new document (.xml, .xhtml, .html, .txt, ...) using an XSLT document and a processing processor.

The XSLT language describes the conversion of an XML derivative (also called XML dialect or XML application), in the form of an XML document , into another document, called a transformation. The resulting document mostly conforms to XML syntax, but other text files and even binary files can also be created.

A transformation consists of a number of individual transformation rules called templates . A template has an XPath- based pattern that describes which nodes it applies to, and a content that determines how the template creates its part of the target tree.

An XSLT document contains at least the following languages ​​and XML-based technologies:

Template rules are always used when a certain condition is met. The following example includes the content of all titles ("title" tags) in "em" tags, regardless of where they appear in the document, and leaves the rest untouched.

<xsl:apply-templates/> transforms the child elements of the current element using all applicable rules.

Conflict Resolution is required when a node matches several template rules at the same time. In such cases, the following rules apply.

To sort items, a tag can be combined for-eachwith one sort. The loop then does not run in the order of the nodes of the original document, but in alphabetical or numerical order. In the following example, all book elements are sorted in ascending order according to their price.

With or without order="ascending"the order is always the same (ascending), since this is the default setting. With order="descending"you get a descending order.

The combination of the tags chooseand whencan be used to make several distinctions between cases.

The tag <xsl:text>can be used to allow XSLT to output any text , whereby escaping (the output of “<” and “&” as “& lt;” and “& amp;”) can be switched off. The content can be in normal text or in a CDATA section. The advantage of the CDATA section is that its content is not interpreted, so it can also contain XML syntax. 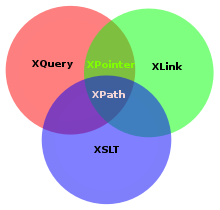 XML languages ​​and their scope

Two important areas of application for XSLT are:

Examples of POP are:

A possible alternative to XSLT is DSSSL , which can also be viewed as a forerunner of XSLT. The biggest advantage of XSLT over DSSSL is its XML-based syntax. This means that every XML editor can automatically also be used for XSLT, and the syntax rules of XML (well-formedness, validity) also apply to XSLT. This makes it possible for XSLT to process itself, so you can develop transformations to create and edit transformations.

MetaMorphosis is also inspired by DSSSL. In contrast to XSLT, it is a "target-driven" processor. The target tree to be created is constructed. The rules do not describe how the input file should be processed, but rather how the output file should be constructed. The process begins with a virtual rule "! Begin" with which the transformation process begins. The transformation rules describe how the nodes should be filled. In doing so, queries are formulated in the source trees as well as in the target trees that have been set up until then. The query language is a set-oriented expression that can read out and also set all properties of the nodes. Generated nodes can subsequently be manipulated as required.

Other features of MetaMorphosis support industrial use: flexible memory management for very large documents, creation of auxiliary data structures (getindex, putindex) for quick access, plug-in architecture, API for C ++ , C # , Java , the possibility of implementing dedicated frontends and backends (in C ++ as well as in the MetaMorphosis scripting language).

As part of the application server Zope was Template Attribute Language (TAL) developed; TAL templates are (depending on the output format) [X] HTML or XML documents, the content of which can be dynamically replaced by attributes and thus combine the prototype and the template used. The <xsl:for-each>attribute roughly corresponds to the element tal:repeat; the TAL Expression Syntax is used as the expression syntax . If no HTML or XML element is suitable as a carrier for the attribute, <tal:beliebigerBezeichner>elements can also be used.

A fundamental alternative to XSLT is the possibility of writing such transformations in any programming language (e.g. Java, C ++ or Perl ). However, if certain requirements are met, XSLT can provide a certain guarantee for well-formed and possibly even valid target documents.

CSS is not an alternative to XSLT because CSS is a formatting language . CSS merely describes how the components of a tree (acoustically or visually) are to be formatted, while XSLT can radically change the tree or, as a result, provide documents that are not based on XML. With XSLT you can e.g. B. automatically create tables of contents, indexes, link lists and complex calculations, but not with CSS. With XSLT it is also possible to generate results that use CSS as the formatting language.

The following XSLT creates a simple table of contents for an XHTML page with headings: