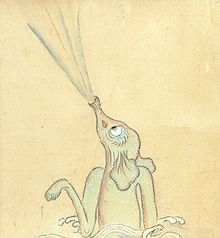 Depiction of a Shiofuki from the Bakemono tsukishi emaki ; anonymous, ink painting on paper, first half of the 18th century.

Yōkai ( Japanese 妖怪 ) are figures of Japanese folk belief and are most likely to be compared with mythical creatures . They are also called Mononoke ( 物 の 怪 ) and are a subgroup of the Obake ( お 化 け ) - but the terms are often used synonymously. The forms range from the malicious Oni ("demon") to the envious Kitsune ("fox") and the Yuki Onna ("snow woman"). Some have partly animal and partly human traits, e.g. B. Kappa and Tengu . Yōkai have supernatural powers, so encounters with them are dangerous. Yōkai are often driven by obscure motifs and plans. Some stories tell of yōkai who mated with humans to produce half-yōkai ( Han'yō ). Many of these stories start out as love stories, but don't end well because of the many obstacles that stand in the way of a relationship between humans and yōkai .

Some yokai avoid human contact and live in uninhabited, isolated areas far from human habitation. Others live near human settlements because they are attracted to people or the warmth of human homes by fire. The yōkai are traditionally associated with fire, the northeast and the summer season, when the spirit world is closest to the earthly one. Yōkai and Obake are often depicted in forms that are as amusing as they are terrible. Most yōkai are not vulnerable to weapons, but Shinto exorcists (Japanese 退 治 屋 taijiya ) or Buddhist monks have the necessary powers to fight them.

Japanese folklorists and historians view yōkai as phenomena that appeared supernatural or inexplicable to their observers. Inspired by Japanese mythology or their own ideas, many artists such as Toriyama Sekien created a variety of yōkai in the Edo period . Many nowadays wrongly suspect that some yōkai (e.g. Kameosa and Amikiri ) created in this way have a mythological origin.

There is a wide variety of yōkai in Japanese folk beliefs. In general, yōkai is a broad term used to refer to virtually all monsters and supernatural beings, including those of Western folk beliefs. The German script is so often adopted into Japanese myths that some believe it originates from them. 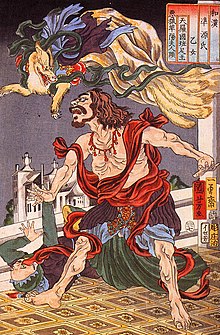 "Prince Hanzoku is haunted by a kitsune", woodcut by Utagawa Kuniyoshi (19th century)

Tanuki on a woodcut by Yoshitoshi (1881). The illustration clearly shows the oversized testicles typical of traditional tanuki representations.

In Japan some animals are believed to have magical powers. Many are Hengeyōkai ( 変 化 妖怪 , shapeshifters ) who imitate people, mostly women, and show human traits similar to the animals from Central European fairy tales and fables. They are considered to be the "leaders" of the animal kingdom and in their natural form are usually indistinguishable from common animals of their species. However, they should be able to transform themselves into "rulers" of their animal forms as well as into humans.

Foxes are associated with the deity Inari . While the kitsune likes to transform into the shape of a beautiful woman and is said to be cunning and cunning like in Europe, the tanuki is a rather cozy fellow. No Japanese pub is complete without a statue of a tanuki with a big sake jug or a promissory note in its paw.

One of the most famous representatives of Japanese mythology is the oni , a type of ogre that lives in the mountains . They usually have red, blue, brown, or black skin, two horns on their head, a wide mouth with fangs, and a loincloth made of tiger skin. Oni also often have an iron club or a huge sword with them. For the most part, Oni are portrayed as malicious, but occasionally also as the embodiment of an ambivalent natural force. Like many obakes , they are connected to the northeast, which was taken from ancient Chinese ideas.

Many yōkai were originally people who experienced a supernatural transformation into something terrible or grotesque through extreme emotions. Examples are:

There are tons of yōkai that are too bizarre to be categorized. These are perversions or metamorphoses of normal living beings or completely new types of goblin-like creatures. Examples are:

Use in literature and film

Different types of yōkai can be found in mythology-inspired literature, especially manga , and Japanese horror ( J-horror ) films . The man most associated with Yōkai's whereabouts in the general imagination in Japan is Shigeru Mizuki , the creator of series such as Ge Ge Ge no Kitarō, about a one-eyed yōkai superhero, and Sampei no Kappa . Other well-known manga and anime in which Yōkai play an important role are Urusei Yatsura , in which the main character is a female oni, and Inu Yasha , which is about a Han'yō and is set in medieval Japan, and Pom Poko , a film about tanuki in today's world, threatened by civilization, including kitsune ; Princess Mononoke , in which many animal yōkai play a role, and Spirited Away , in which the main character works in a bathhouse full of gods and yōkai. Other movies that feature yōkai include Yōkai Daisensō , a 1960s / 70s film series, and a 2005 remake of Akira Kurosawa's dreams , which features a procession of kitsune and a person who resembles a traditional oni . A more recent example is the manga and anime series Nura - Lord of the Yokai by Hiroshi Shiibashi.

But yōkai also appear in western novels and films , e.g. B. in Tom Robbins ' novel Villa Incognita , in which a Tanuki takes the lead role, but also Harry Potter by Joanne K. Rowling , in which Kappa and other creatures play minor roles. Kitsune in the form of a pair of twins also appear in Lisa J. Smith's youth series Diary of a Vampire . Lafcadio Hearn's collection of ghost stories Kwaidan: Stories and Studies of Strange Things contains many stories by Yūrei and Yōkai . The Hawaiian folklorist Glen Grant was known for his Obake Files announced a series of reports of supernatural incidents in Hawaii. Most of these incidents and reports were of Japanese origin, which, through frequent retelling, diverged from this one. The Mexican-American author Alfred Avila added the La Japonesa story about a nekomusume (cat girl) to his Mexican Ghost Tales of the Southwest collection . In The Kingdom of Kitsune by Nina Blazon , both kitsune and tanuki, kappa and tengu appear.

A ghost renaissance has been observed in Japan since the 1980s, which is represented by the name ikai ( 異界 , "Other World"). Ikai is used here for the otherworldly space, in which both the traditional figures and young, urban ghost apparitions are equally at home. The term can, among other things, be traced back to the publication Kodomo to wakamono no ikai by the Japanese sociologist Kadowaki Atsushi, who describes the decline in reality and increasing social alienation in modern industrial societies and their metropolises.

The term ikai featured prominently in intellectual discourses in Japan in the 1980s. The economic boom of this period, when Japan found itself in the phase of prosperity known as the bubble economy , encouraged the question of Japanese identity, the dismantling of which was proclaimed by some Japanese cultural critics through the modernization of the country. The criticism of the belief in progress and the performance orientation of modern Japanese society, of values ​​that have been interpreted as "Western", was captured in catchy images. A more harmonious Asian understanding of life and life processes, an Asian bioethics and an interactive Japanese afterlife that promises security were evoked. Japanese ghosts are popular representatives of this line of argument to this day. The beings of the shadow world are summoned by ethno-esoteric cultural critics as identity-creating keepers of national-spiritual convictions, and they also form an important point of reference in the discourses of the ecological-alternative current. While these two camps are initially foreign to each other, the different positions meet in the field of a growing market for identity, mix in lifestyle formulas and cancel each other out in the utopian and nostalgic.

As part of the identity industry, the Otherworld products are also part of popular culture. Here ghosts are an expression of the desire to be protected, are reflections of power fantasies and occult visions or just entertainment and cute children's toys. The poison gas attack of the neo-religious association Ōmu Shinrikyō in 1995 resulted in a certain public ostracism of the occult and the promoters of the occult boom.