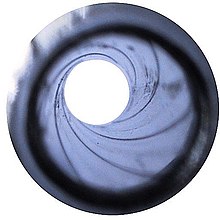 Trains in a 9mm pistol 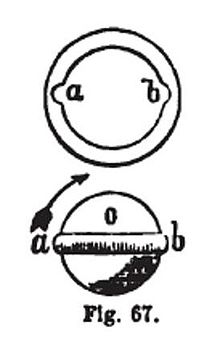 Brunswick rifle about 1860, barrel profile and ball with belt

As trains is called the in the running of small arms and in the tube of guns molded helical grooves , which the projectile a twist imparting and thereby the bullet trajectory stabilize.

The areas that remain between the trains are called fields . Accordingly, the inside diameter of the barrel from train to train is called train caliber, from field to field field caliber. The slide caliber is always larger than the field caliber, the diameter of the bullet corresponds to the slide caliber (the bullet is slightly squeezed when fired and thus receives a scratch-mark pattern that is characteristic of the respective barrel).

When, where and by whom rifled barrels were first made is not documented. Gunsmiths from Nuremberg, Leipzig and Vienna are mentioned in the literature between 1450 and 1500. There is a hunting rifle of the Habsburg Emperor Maximilian I with a bronze barrel in which 12 or 14 slides with a slight twist are cut. Two trains are no longer clearly recognizable. The rifle can be dated from an embossed coat of arms of Maximilian, which he wielded as Roman-German king from 1493 to 1508; This knowledge is owed to the bronze barrel of the rifle, which was not destroyed by rust like other firearms from this time. The first rifled barrels could have been made towards the end of the 15th century.

It is also assumed that the first trains were straight, i.e. ran in an axial direction, and that they had more grooves than grooves. These initially served to absorb black powder residue and thus enable easier reloading of the bullet from the muzzle.

Maximilian I's rifle already had spiral groove-shaped features. It is doubtful whether the physical background was already known at that time. However, the stabilizing effect of the bullet rotation of arrows was well known, in which the feathers glued to the rear end at a small angle to the arrow axis ensured a higher accuracy. Corresponding ballistic knowledge was only gained in the early 19th century. 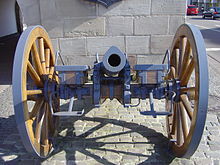 In contrast to handguns , rifled barrels were only used in cannons in the second half of the 19th century, when the invention of the cartridge or cartridge made breech loading guns possible. The reason lies in the rather cumbersome loading technology of rifled muzzle-loading weapons: lead bullets in the slide caliber can be hit into the barrel muzzle so that the rifles can imprint themselves on the soft surface of the bullet, but afterwards it is hardly possible to push down to the powder charge. In addition, there are residues from the powder incineration of previous shots, which make the pulls of the black powder used at the time more difficult than the modern powder used today .

A sabot made from a greased plaster was necessary for muzzle-loading weapons with a rifled barrel . These were mostly round patches of fabric or leather with which an inlaid, under-caliber bullet could be struck relatively easily with a hammer into the barrel and pushed down onto the powder charge with the ramrod. The plaster took over the guidance of the ball and at the same time the sealing of the powder gases during the shot. This was not possible with large-caliber cannons, especially since iron balls were used there.

The shape and number of trains was very diverse from the start. One tried constantly to improve the accuracy and to minimize the disadvantages of the more complex loading.

Too little twist leads to insufficient rotation of the bullet and thus to poorer accuracy. A twist that is too strong would like to give the bullet a particularly high rotational acceleration, which in the case of soft (previously: lead), heavy bullets with a high mass moment of inertia, soon at the beginning of the shot in a phase of high gas pressure and longitudinal acceleration, leads to the bullet forming a positive fit with the pulls tears and leaves the barrel with very little rotation.

The shape (cross-section) of the trains was also varied in every imaginable way: There were a lot of fine hairs , more like grooves, star-shaped, semicircular, angular, symmetrical and asymmetrical rounded trains up to polygons where the trains had such large radii that they are difficult to see with the naked eye. Attempts were even made with trains that produce heart-, cross- and rosette-shaped barrel cross-sections.

The shape and depth of the trains are directly related to the shape and material of the projectile. In a soft material such as lead , deep puffs (actually the fields) can easily be impressed (see lead shirt grenade ), while modern full-jacketed bullets made of tombac , steel or other hard alloys only allow shallow puffs.

In the case of handguns, the power is transmitted over the entire shell of the bullet, in the case of larger calibers via guide bands made of copper or a soft alloy.

The slope of the train is called the twist angle . For manufacturing reasons, this is almost always constant (constant twist). If the angle is adjusted to the speed of the bullet in the barrel, one speaks of progressive twist.

The distance on which the trains and fields complete one revolution (360 °) is called the twist length . (The analog on the screw thread is its pitch .)

The forensic ballistics can close on the train profile is cuts in missile at an individual weapon.