ADFGX and ADFGVX (also: ADGFX or ADGFVX ; actually secret writing of the radio operators 1918 , GedeFu 18 for short ) are manual encryption methods used by the German military during World War I. They were used to transmit messages secretly using wireless telegraphy . The encryption takes place in two stages and is based on a substitution (replacement of characters by others), followed by transposition (exchange of the arrangement of the characters).

Both methods were invented by the German intelligence officer Fritz Nebel (1891–1977) and referred to by the army as the “secret code of radio operators 1918”, or “GedeFu 18” for short. The Allies gave the new procedures their distinctive names based on the letters that appear alone in the intercepted radio messages. ADFGX was used for the first time on March 1, 1918 on the German Western Front. ADFGVX is the successor to ADFGX and was used from June 1, 1918 on both the Western and Eastern Fronts.

The plain text characters are mono-alphabetically replaced by pairs of characters that only consist of the letters "A", "D", "F", "G" and "X". This is done with the help of a Polybios square according to the following scheme:

A secret key in the form of a password , for example "wikipedia", is entered in a matrix of five rows and five columns . Multiple letters are only used once in the password. "Wikipedia" becomes "wikpeda". The rest of the square is filled with the remaining letters of the alphabet (often in reverse order , starting with "z"). Since the usual Latin alphabet consists of 26 letters, but a 5 × 5 matrix only offers 25 spaces, one letter is left out, for example the "j", which is rare in German, which can be replaced by "i" if necessary. In addition, the five letters “A”, “D”, “F”, “G” and “X” are written on the top and left edge of the Polybios square. In this way you get the following Polybios square with the keyword "wikipedia":

The plain text is now replaced letter by letter by the pairs of characters on the edge of the Polybios square. A typical text would be, for example, " Accelerate ammunition point, if not seen also during the day ". The first letter “M” of the message becomes “GG”, “u” becomes “FD”, and so on. Overall, the plain text (top line in each case) results in the following "intermediate text" (bottom line in each case):

Encryption methods of this type, in which plain text characters are always replaced by identical ciphertext characters (or, as in this case, pairs of characters) according to a fixed scheme (in cryptography one speaks of a fixed alphabet ), are generally referred to as monoalphabetic substitution methods. A simple substitution offers little protection against unauthorized decipherment and is relatively easy to break . To prevent this, a second level of encryption is added.

The intermediate text is entered line by line in a second matrix. The width of the matrix results from the length of a second keyword. In fact, keys 15 to 22 in length and matrices of the appropriate width were used. This second password, for example "OBSERVATION LIST", is written over the second matrix. The letters of this key are numbered in alphabetical order. The "A" gets the number 1, the "B" at the beginning the number 2, the second "B" the number 3 and so on until finally the "U", which gets the number 17.

After the intermediate text has been entered line by line in the matrix, it is now read out again column by column . The order of the columns is determined by the alphabetical order of the individual letters of the password, which is noted below the password for the sake of clarity. Reading therefore begins with the fifth column (password letter "A") and the ciphertext piece "GXGGADDD" and ends with the ninth column (password letter "U") and the text fragment "FFFFGDX". The complete ciphertext is:

From a cryptographical point of view, it is important that this procedure tears the letter pairs that correspond to the plaintext letters in monoalphabetics and that they now appear in far apart places in the ciphertext. This fractionation (from Latin fractio , "breaking up") results in a significantly improved security against unauthorized decipherment. Usually, the ciphertext characters are not linked together as a long worm, but rather arranged in groups of five letters each, as is the case here. This makes it easier for radio operators to orientate themselves in the text. The ciphertext is now transmitted wirelessly in the form of Morse code . An important motive for choosing exactly these five letters is that the Morse code for "A", "D", "F", "G" and "X" can be easily distinguished.

In practical field use, between 25 and 150 encrypted messages were transmitted every day. To prevent unauthorized deciphering, both passwords used as keys were changed after one to three days.

On June 1, 1918, a sixth letter, the "V" (Morse code ···-), was introduced and the ADFGX procedure was expanded to ADFGVX. The Polybios square now contained six times six so 36 places. In this way it was possible to encode the complete Latin alphabet with all 26 letters plus the ten digits . A possible (arbitrary) square would look like this:

The authorized recipient is in possession of the two secret passwords ( keys ). He can thus process the described steps in reverse order and thus obtain the plain text from the received ciphertext by decryption . 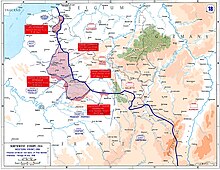 Course of the Western Front in 1918

The art of deciphering lies in determining the plaintext without knowing the two passwords. The French artillery officer Capitaine Georges Painvin (1886–1980) achieved this masterpiece in April 1918 shortly before and during the German spring offensive . According to a number of historians and cryptologists, Painvin made a significant contribution to the fact that German soldiers did not succeed in taking Paris in the First World War.

A major weakness that he was able to exploit is the simple monoalphabetic substitution by the Polybios square, which offers practically no protection against unauthorized decipherment. In this respect, the cryptographic security of the ADFGX method consists mainly in tearing up the bigrams of the intermediate text with the help of the column transposition and is therefore basically only one-step. If the column transposition can be cracked , the plaintext can be easily reconstructed.

The "radio message of victory"

Even after strengthening the cryptographic method by adding a sixth letter, Painvin managed to break ciphertexts . On June 1, 1918, the French radio listening station on top of the Eiffel Tower intercepted a German radio message for the first time, which not only contained the letters A, D, F, G and X, but also the letter V. The radio message came from the Remaugies region , north of Compiègne , and read:

Painvin recognized this and correctly concluded that the Germans had expanded the Polybios square from 5 × 5 to 6 × 6 and were thus able to encode a total of 36 characters instead of the previous 25 letters. He also correctly suspected that the 26 letters of the alphabet plus the 10 digits (0 to 9) were used, and based his cryptanalysis on this assumption. After intensive work over 26 hours until he was physically exhausted, he was still able to decipher it on June 2, 1918. The plain text read “Ammunition accelerate point, if not seen, even during the day”. This information was immediately forwarded to Marshal Foch's French headquarters and convinced him that the Germans were planning a massive attack in the section of the front near Compiègne. He concentrated his last reserve troops around this city, which meant that the German attack that actually took place here shortly afterwards could be repelled. On the French side, the German radio message has since been referred to as Le Radiogramme de la Victoire (The "radio message of victory").

It was not until 1966, nearly fifty years later, that Fritz Nebel learned that his system had been broken during World War I and said he had originally proposed a double column transposition , but that this had been rejected in meetings by his superiors. At that time, for practical reasons, they opted for the simple column transposition. In 1968, Nebel and Painvin met in person, and Nebel expressed his feelings by saying that the enemies of yesterday meet as the friends of today. Painvin insisted that if it had been done as Nebel had suggested, he certainly couldn't have broken the encryption.