Location of the Abyei area

Abyei is an area with special administrative status that is disputed between (Northern) Sudan and South Sudan . Its current delimitation was established in 2009 by the Permanent Court of Arbitration in The Hague . According to the peace agreement of 2005 , the area is assigned to both the Sudanese state of Janub Kurdufan (South Kordofan) and the southern Sudanese state of Northern Bahr el Ghazal (North Bahr al-Ghazal ).

Abyei is mostly north of the Bahr al-Arab River , which separates the north and south, and thus geographically in Northern Sudan. Until 1905, however, it was politically part of South Sudan, and it is mainly inhabited by Ngok, a sub-group of the Dinka who live mainly in South Sudan. In addition, Arab Misseriya - Baggara who feel they belong to the north live in Abyei . Both groups live mainly from cattle breeding.

The population of the former Abyei district (which also included areas that were fully assigned to Northern Sudan and no longer belong to the disputed Abyei area) was estimated at around 34,000 in 2003, covering an area of ​​10,460 km². After the conclusion of the peace agreement in 2005, this number rose significantly due to returnees from other parts of the country and abroad.

Ngok-Dinka and Misseriya immigrated to the region in the 18th century. Their coexistence was at times peaceful, at times marked by conflict. In the Anglo-Egyptian Sudan from 1899 the area of ​​the Ngok was initially administered as part of the province of Bahr al-Ghazal and thus the south. When the Ngok complained to the British authorities about attacks by the Misseriya, however, these authorities decided to administer the Misseriya and the nine chief realms of the Ngok together, and placed both under the northern Kurdufan Province . In the decades that followed, the two groups lived together largely peacefully.

That changed when the civil war between North and South Sudan reached Abyei in 1965 and fighting broke out. Misseriya have been upgraded by successive governments in Khartoum to militia against the South Sudanese SPLA rebels. They drove many Ngok out of the area. Their activities also extended to the southern regions of Bahr al-Ghazal and al-Wahda . For the Misseriya, the government's motivation to participate in the war was the fear that they would lose their grazing rights if Abyei came to South Sudan. The loss of land to large-scale agricultural projects, the restriction of their mobility due to oil production, and falling rainfall exacerbated this problem.

The Addis Ababa Agreement , which ended the first civil war in 1972, provided for a referendum on whether Abyei should become part of the autonomous region of South Sudan. However, this referendum was not held.

Abyei after the 2005 peace agreement 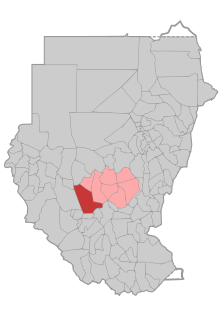 As part of the peace agreement between North and South Sudan, which ended the second civil war in 2005, Abyei - like the Nuba Mountains and an-Nil al-azraq - was defined as a Transitional Area , the demarcation of which and the political allocation of which was to be decided later. It was agreed in the so-called "Abyei Protocol" to create an Abyei Boundary Commission ( Abyei Boundary Commission ) made up of SPLA and government representatives and international experts to set the controversial border and the division of oil stocks and grazing grounds. The nationwide government of national unity would then appoint an interim administration for the area, and in 2011 residents would vote in a referendum on whether Abyei should belong to North or South Sudan. By then, 50% of the income from the oil reserves would go to the central government and 42% to the autonomous government of South Sudan, and 2% each would go to the regions of Bahr al-Ghazal and Janub Kurdufan, the Ngok and the Misseriya.

Decisive for the demarcation was the question of which area comprised the nine Ngok chief empires around 1905. The South Sudanese side is of the opinion that their territory included permanent settlements far north of the Bahr al-Arab. The Sudanese government, however, believes that before 1905 the Ngok lived exclusively south of the river and only later migrated north.

The Boundary Commission concluded that the Ngok can make legitimate and complete claims up to latitude 10 ° 10'N, while between 10 ° 10'N and 10 ° 35'N Ngok like Misseriya have traditional land use rights. As a result, Abyei should be divided at latitude 10 ° 22'30 ”, whereby both sides should retain existing grazing rights on the other side of the border. The Misseriya and the President of Sudan rejected this decision - which also included the Heglig oil reserves as part of the disputed area.

In May 2008, the worst fighting between South and North Sudan since the peace agreement broke out in Abyei. Abyei was largely destroyed and tens of thousands were internally displaced , most of them to South Sudan. The figures for the number of displaced persons range from 35,000 to 70,000. Amnesty International reported over 50,000 displaced persons.

On June 21, 2008, the Sudanese government and the SPLA agreed to bring the dispute over the border line from Abyei to the Permanent Court of Arbitration in The Hague and to recognize its judgment with binding effect. The five-member arbitral tribunal included Pierre-Marie Dupuy (President), Aun Schaukat al-Chasauneh , Gerhard Hafner , W. Michael Reisman and Stephen Myron Schwebel . The parties submitted their pleadings in December 2008 and February 2009; the oral hearing then took place from April 18 to 23, 2009. On July 22, 2009, the tribunal issued its final and binding judgment on the border line, which was immediately accepted by both parties. The disputed area north of the Abyei River inhabited by the Ngok-Dinka was assigned to the north and thus to the Misseriya in the award. The new border runs further south than the previous provisional division, so that a larger part was clearly assigned to the north and the area claimed by the south has become much smaller. The allocation of Heglig 2, one of the largest oil fields in the country, is particularly disadvantageous for the south and a gain for the northern Sudanese government . Since then it has been outside Abyei and can only be exploited by the north.

The disputes about the distribution of the oil reserves are not settled with the demarcation. In a first reaction, the Sudanese government declared that it no longer wanted to pass any more income from the Heglig oil fields to the south. To prevent new fighting from breaking out, UNMIS peacekeepers were stationed in the city of Abyei.

→ Main article : Referendum on the status of the Abyei region

Originally, parallel to the independence referendum in South Sudan, a separate referendum was to take place in Abyei in January 2011 , in which the population would decide whether the area should belong to the south or the north. However, no agreement could be reached on who would be eligible to vote. According to the representatives of the south, only the sedentary Ngok-Dinka should be considered the "original population" of the area and be eligible to vote, since the nomadic Misseriya would only pass through there a few months of the year. The representatives of the north, however, demanded the participation of the Misseriya. The referendum in Abyei was therefore canceled.

After the independence referendum in South Sudan, which resulted in a clear vote for independence, there was increased fighting in Abyei. In the draft constitution of South Sudan, Abyei is expressly claimed as part of the South. The northern Sudanese ruling party, the NCP , warned that such a claim could lead to the north not recognizing the independence of the south and provoke war.

Occupation by Northern Sudan in May 2011

On May 22, 2011, d. H. a few weeks before the independence of South Sudan, which was planned for July 9, 2011, the northern Sudanese army occupied the area after fighting. The action was triggered by an attack on May 19, 2011 on a convoy of northern Sudanese armed forces escorted by UN soldiers, for which, according to the north, armed forces of South Sudan are responsible. The allegation was rejected by the South Sudanese side. The US government condemned the operation as "inappropriate and irresponsible" and called it a "direct violation" of the January agreement that provides for a bilateral withdrawal of troops from the area. From the UN side, the actions of the north were rated as a criminal attack ( "a criminal attack" ).

On June 7th, the UNHCR published a report that 100,000 people have been displaced since the occupation of Northern Sudan. Ban Ki-moon also confirmed an originally confidential report that around 15-20 percent of the Ngok-Dinka houses were burned down. There is a risk of ethnic cleansing if the conditions for a return of the Ngok are not created and the Sudanese armed forces conquer the region.

On June 21, 2011, the two conflicting parties agreed, through the mediation of the South African ex-president Thabo Mbeki , to demilitarize the Abyei region. Troops are only allowed to approach the disputed area within ten kilometers. The northern Sudanese army is to withdraw its troops and 4,200 Ethiopian UN soldiers ( UNISFA ) are permanently monitoring the agreed status. In addition, a joint head of administration and his deputy are to be determined for the area. On June 29, both sides signed the agreement in Addis Ababa . The UN Security Council created the Resolution 1990 the basis for the deployment of the United Nations Interim Security Force for Abyei (UNISFA). At the end of May 2012, Sudan withdrew its last troops from Abyei, as confirmed by UNISFA.