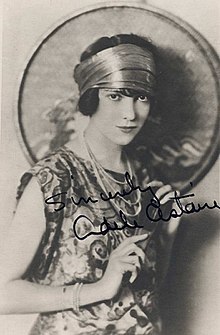 Adele Astaire (born September 10, 1896 in Omaha , Nebraska as Adele Marie Austerlitz , † January 25, 1981 in Tucson , Arizona ) was an American dancer and entertainer in the first half of the 20th century. 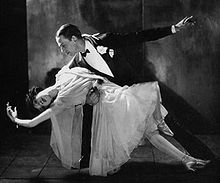 Adele Marie Austerlitz was the daughter of the Austrian immigrant Frederick "Fritz" Emanuel Austerlitz (1868-1924) and his wife Johanna "Ann" Geilus (1878-1975) of German descent. Together with her younger brother Fred Astaire (1899–1987) Adele Astaire attended a dance school at an early age and then appeared in provincial theaters in Nebraska. Both came to New York City as children to be trained in dance and singing. Adele gained tremendous popularity alongside her brother on cabaret , vaudeville , and concert halls around the world. The Astaire siblings had their first film appearance in a film by Mary Pickford in Fanchon the Cricket in 1915 . In 1917 they conquered Broadway with the play Over the Top .

Adele Cavendish with her husband, 1932

In 1929 Adele met the English aristocrat Lord Charles Arthur Francis Cavendish (1905-1944), the second son of Victor Cavendish, 9th Duke of Devonshire and Lady Evelyn Emily Mary FitzMaurice , on a tour of Great Britain . Media interest has been so intense over the years that the couple held their wedding - the year before Adele had ended her artistic career - in secret at the Cavendish family home, Chatsworth House in Derbyshire , on May 9, 1932. The couple later lived at Lismore Castle in Ireland . The marriage, which all reports said was a happy one, had three children, but all of them died shortly after birth. Together with her husband traveled a lot and quickly found Adele contact with the European high - and American financial aristocracy . In addition to social obligations, Adele was involved in several charitable organizations and also used the media for this. Her husband died in March 1944 after a long illness and was buried in the family vault in Devonshire.

Adele Cavendish married on April 29, 1947, the second marriage, the US investment banker and real estate advisor Kingman Douglass (1896–1971). During the Second World War he served as an officer in the US Air Force . Later he was responsible for setting up the Central Intelligence Agency together with Hoyt S. Vandenberg .

Name in different phases of life