Adolf von Inffeld first attended the Imperial and Royal State Trade School in his native Vienna. There he was a student of Camillo Sitte and Julius Deininger . He then studied from 1892 to 1896 at the Academy of Fine Arts Vienna with Otto Wagner and Carl von Hasenauer . He graduated from Otto Wagner's “Special School” with the design of a double theater, for which he was awarded the Pein Prize. After graduating, he worked in the studios of the architects Franz von Neumann and Friedrich Dietz von Weidenberg. He also worked for the building construction department of the Lower Austrian regional building authority. From 1898 to 1907 he taught at the building trade school in Bolzano . From 1908 he taught at the building trade school in Graz. At his suggestion, the school was transformed into the Federal College for Building and Applied Arts Graz . From 1919 to 1934 he was director of the school.

Adolf von Inffeld worked with Viktor von Geramb to create a heritage protection architecture in Styria. In 1909 he was one of the founding members of the Styrian Association for Homeland Security. At the same time, he was also one of the representatives of the more modern Viennese architectural movement (Secession). 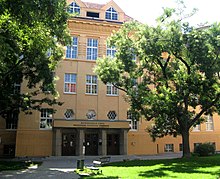 School building designed by Adolf von Inffeld on Ortweinplatz in Graz, one of his main works