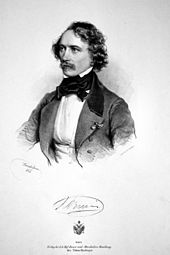 According to statements made by his contemporaries, especially Hector Berlioz , Servais was the most famous cellist of his time. He was nicknamed "The Paganini of the violoncello".

Servai's father was a humble church musician who taught him to play the violin. At the age of 12 he decided to give up the violin in favor of the cello after listening to his future teacher Nicolas-Joseph Platel in a concert. In 1829 he became Platel's assistant at the Brussels Conservatory .

During his numerous tours with over 10,000 concerts all over Europe, his own compositions were regularly on the program. His travels took him to Russia, among other places, where he received a Stradivari cello as a present from a Princess Yusopov . Since then this instrument has been called "Servais". It is now in the collection of the National Museum of American History in Washington.

In 1849 Servais married the rich, Jewish, music-loving merchant daughter Sophie Féguine from Saint Petersburg who had converted to Christianity.

Servais was friends with numerous musicians of his time, for example with Franz Liszt , who lived in Servais' house several times during his stays in Brussels, with the violinists Henri Vieuxtemps and Hubert Léonard , with whom he had four duos for cello and violin based on themes from well-known operas composed. But also with Gioacchino Rossini . He had a long pen friendship with the violin maker Jean-Baptiste Vuillaume . Ludwig von Stainlein dedicated his Fantasy to him in 1851 and his Serenade for 4 cellos in 1856.

A few years after his death, a memorial was erected to him in his hometown. His eldest son François-Matthieu, called Franz Servais, was a pianist and chief conductor at the Monnaie Theater . The youngest son Joseph Servais (1850–1885) was, like his father, an important cellist. He worked as a professor at the Brussels Conservatory, and Henri Vieuxtemps composed his two cello concertos for him.