The Ordinary finial ( Polygala vulgaris ), also ordinary milkwort called, is a plant type from the family of polygalaceae from the genus finials ( Polygala ). The plant genus was named Polygala because it was previously assumed that consumption by cattle would lead to more milk production. So is poly much and gala also comes from the Greek and means milk. 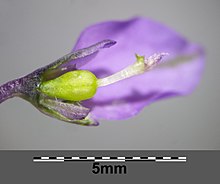 The common finial is only found in Europe in sparse pine forests, on alternately dry meadows, in coastal dunes, in dwarf shrub heaths and on grassy silicate . It was not infrequently observed at the roadsides. In Germany , the common finial is found scattered in the southern federal states, but rarely in the northern federal states. It is on the red list in Brandenburg , Mecklenburg-Western Pomerania , Schleswig-Holstein , Hamburg , Bremen and Saxony . It occurs in societies of the associations Violion caninae, Mesobromion and the orders Arrhenatheretalia and Molinietalia.

The common finial is a perennial herbaceous plant that reaches heights of only 5 to 25 cm and has a mostly upright stem . It is a hemicryptophyte , so it survives above the earth. Lower leaves are sometimes found in clusters, but they do not form a rosette of leaves . The upper stem leaves are slightly larger than the lower ones and of the same shape. They are always alternating on the stem.

The bracts are not hairy and are no longer than the flower stalks. There are usually more than ten individual flowers in dense racemose inflorescences . The flower buds do not protrude from the tip of the inflorescence. The hermaphrodite flowers are zygomorphic . Each individual flower has petals about 5 to 10 mm long . The color of the corolla varies between blue and purple, only rarely can purple forms appear.

Of the total of six sepals , the two large lateral ones are colored like petals and envelop almost the entire flower. They are called "wings". The large lower fringed petal is called a boat . It should serve as an approach point for the insects and simplify pollination. Within the flower on the top of the finial has a bivalve bag that holds eight stamens which are four to one another grown, and the fruit leaves surrounds. Two overgrown carpels form the upper ovary . Nectar is only excreted by special nectar glands at the base of the flower, which is why the finial can only be pollinated by relatively long-nosed insects such as bees and butterflies .

The wings are 6 to 9 mm long and 3 to 5 mm wide and only slightly protrude from the ovary. They are rounded at the front and have 6 to 20 net meshes. The shuttle has a small, slashed, multi-lobed appendage at the front. The stylus is just as long as the ovary and ends like a spoon. The stamens are arranged like a ring on it. The sharp scar is very small and sticky.

Two-lobed, two-seeded capsule fruits are formed. The seeds have a toothed aril (seed coat). The plant is a wind spreader. There is also random spread and ant spread .

The species has chromosome number 2n = 68.

The common finial is a hemicryptophyte and stem plant, i.e. i.e., it has no rosette of leaves during flowering.

The flowers are small, homogamous "butterfly flowers (boat flowers)". The larger lower petal, the "boat", serves as a pole for the insects to approach. The stylus ends in a spoon-like formation into which the anthers that pop open at the top with a hole empty the pollen. Below this is the scar as a sticky protrusion drawn out to a point. Nectar is excreted by special nectar glands only at the base of the flower, which is why the finial can only be pollinated by relatively long-nosed insects such as bees and butterflies. The pollinators achieve their goal by pushing their proboscis between the two flaps and past the "pollen spoon" and the stigma. There they wipe off the pollen they have brought with them and at the same time smear their proboscis with the adhesive, on which new pollen then sticks when the proboscis is withdrawn .; this is intended to ensure cross-pollination; however, spontaneous self-pollination is also common, partly as a result of closing movements of the flower.

The flowering period extends from May to August.

The fruits are 2-lobed, 2-seeded capsules. The up to 3 mm long and specifically heavy seeds have a toothed seed coat or aril. They are subject to random propagation or to the spread of various ants, e.g. B. by the red wood ant ( Formica rufa ). The fruit ripeness extends from July to November.

There are three subspecies in Germany: