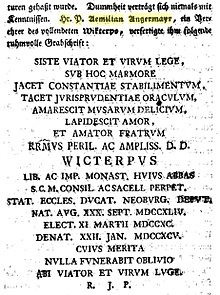 Inscription written by Angermayr for the grave of the abbot of St. Ulrich and Afra , Wikterp Grundtner (1744–1795)

Aemilian Angermayr was born in May 1735 in the Central Franconian market town of Pleinfeld. Nothing is known about his family of origin and his youth. He studied theology in Vienna , Neuburg an der Donau and with the Dominicans in Augsburg. In 1754 he entered the Benedictine monastery of Sankt Ulrich und Afra in Augsburg as a novice , where he took his religious vows on November 13, 1755 and celebrated his first sacrifice on October 14, 1759 . From 1768 to 1772 Father Aemilian worked as a professor of dogmatics in Augsburg. From 1774 to 1777 he taught as theology professor at the Benedictine Abbey of St. Mang in Füssen and then returned to Augsburg as head of the religious group at St. Ulrich Abbey.

Angermayr published several books and theological writings that appeared in Augsburg and Füssen in the early 1760s and 1770s. In 1795 he wrote the grave inscription for Abbot Wikterp Grundtner (1744–1795) from Augsburg , whom he venerated.

Angermayr was also very fond of music. It is said that “he owes his excellent education in music, especially on the violin and in the sciences” “to the seminarium in Neuburg”. Angermayr composed some religious musical works himself, but for a long time they received little attention. It was not until 2012 that his Ave splendens for tenor and orchestra was performed for the first time by the Augsburg choir “Musica Suevia” in the series of music rarities from Augsburger Klosterkomponisten .

Angermayr lived in the Augsburg monastery of St. Ulrich and Afra until secularization in December 1802 and was one of its last residents. Angermayr's fellow brother, the church historian Placidus Braun , reports in his work History of the Church and the Monastery of Saints Ulrich and Afra in Augsburg that the monks continued to live in a fraternal association in the subsequent period - in accordance with the appeal of their former abbot Gregor Observed monastic order, held services and devoted themselves to pastoral care.

Only a few months after the abbey was dissolved, Father Aemilian Angermayr died shortly after he had turned 68 on May 9, 1803 in Augsburg.

Father Angermayr was known and repeatedly mentioned over the centuries in various publications about Mozart's life because of his meeting with the young Wolfgang Amadeus Mozart in October 1777, who briefly ran the St. Ulrich and Afra monastery with his mother and cousin Maria Anna Thekla Mozart visited after Angermayr's return to Augsburg. At this memorable encounter, Father Angermayr Mozart reportedly got drunk quickly, and the gentlemen enjoyed themselves singing offensive songs together. According to Mozart, there were also “indecentities” on the part of the Father towards the young woman whom she put up with. Mozart then expressed himself mockingly and condescendingly in a letter to his father Leopold on October 17, 1777: " P: Emilian ... a courteous donkey and a simple-minded junior of his profession, was very cute."