The Aiguille du Dru [ ɛˈgɥij dy ˈdʀy ] is a mountain in the Montblanc massif , whose showpiece, the 1100 m high west face, dominates the rear valley of the Arve east of Chamonix . The two peaks

rise in the extension of the western ridge of the Aiguille Verte and are separated from each other by the Brèche du Dru ( 3697  m ). In abbreviation, the double-peaked mountain is often referred to as the Dru or, in the plural, the Drus . 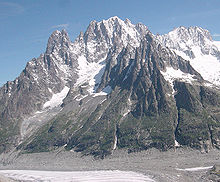 The great difficulties and the impressive western view of the mountain exert a strong attraction on the climbing guild of France , Europe and the world; the ascension story is extraordinary:

The Aiguille du Dru was also Ludwig Purtscheller's mountain of fate . After climbing the Grand Dru on August 25, 1899, his rope team fell , with Purtscheller breaking his right upper arm. He did not recover from this fall. He died in Bern on March 3, 1900 of complications from pneumonia .

After the great landslide on September 18, 1997 and others in the following years, several west wall routes, including the Bonatti pillar, were badly damaged. We currently advise against climbing in the area of ​​the eruptions.